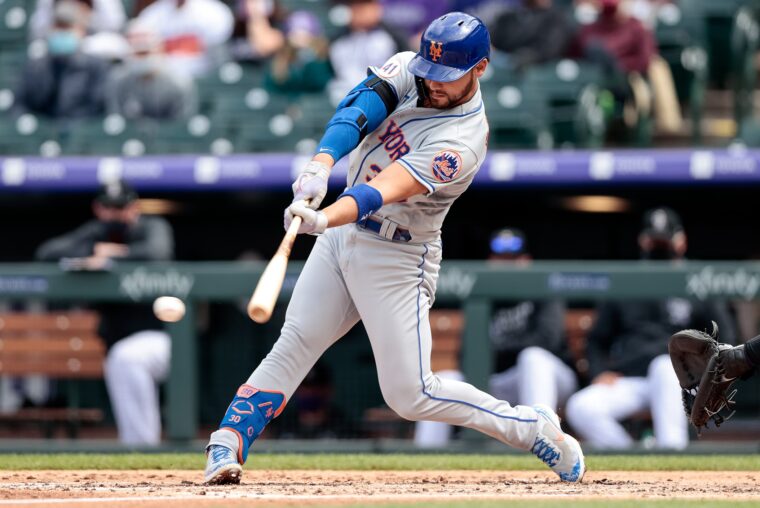 We haven’t gotten to say this enough in recent years — and if we have, it hasn’t been for long — so I’m just going to say it: the New York Mets are a first-place team.

As they use Monday’s off day to prepare for a three-game set against the Chicago Cubs, the Mets begin the day atop the National League East. Despite only playing 11 games thus far, their .636 winning percentage off the strength of a 7-4 record is second in the NL (only the Los Angeles Dodgers are better, because duh).

This is exciting for many reasons, and mostly because New York has found a way to get the job done without all parts of the roster finding a rhythm yet due to such an inconsistent schedule.

Many had a feeling the Mets’ starting rotation was going to be among baseball’s best this year. However, it’s been tremendous thus far, especially considering Carlos Carrasco hasn’t been activated off the Injured List yet.

Purely thinking about the current top two in Jacob deGrom and Marcus Stroman is exciting. In 40.1 innings pitched between these hurlers, they’ve surrendered a total of three earned runs. DeGrom’s 0.45 ERA leads all qualified starters, while Stroman’s 0.90 mark isn’t far behind him at fifth. And then there’s Taijuan Walker, who has flashed increased velocity in his two starts, and David Peterson, who just tied his single-game career-high mark for strikeouts his last time out with 10.

The Mets’ starting staff is one of six clubs with a rotation fWAR above 2.0 (it’s 2.1), while their 2.26 ERA ranks second and their 0.88 WHIP is tied with the Milwaukee Brewers for the best in baseball. This area of the roster is looking as strong projections were expecting in spring training, and it’ll only get better as Carrasco and Noah Syndergaard near their respective returns.

The bullpen? Well, it hasn’t been easy, but that group of hurlers is doing the job. Their collective 4.56 ERA is among the league’s worst, but their 3.12 Skill-Interactive ERA (SIERA) shows they’ve been much better than traditional statistics show. When looking at cumulative fWAR, their 0.6 mark is once again among the best in baseball.

New York’s place in the league with regard to rotation and bullpen fWAR is even more impressive when considering many teams have played five more games than the Mets have at this point.

Offense Is Powerless… For Now

After Sunday’s series-clinching 2-1 victory against the Colorado Rockies, manager Luis Rojas had this to say about the Mets’ offense:

“The bats are going to come around, that’s one thing you can count on with this team,” Rojas said.

With the uneven schedule this club has dealt with over the season’s first two-plus weeks, it should be no surprise that the offense is struggling to click. The team’s cumulative 96 wRC+ through Sunday’s win isn’t horrific considering the circumstances they’ve played under, which not only includes a bunch of postponements, but also a handful of games played in suboptimal hitting conditions. Plus, with a team on-base percentage of .334 that ranks just outside the league’s top five, they’re still showing an ability to get on base at a high clip.

What does jump off the page, though, is this team’s lack of power. The Mets have hit just six home runs through 11 games, which is last in baseball. Obviously, since they’re five games behind most teams, that’s not shocking. But when using other statistics to gauge New York’s power output, it also checks out. The team’s .107 ISO is the lowest in the league, while its .353 slugging percentage is among the lowest.

This is a lineup that has a number of players with proven power at the big-league level, including Pete Alonso, Michael Conforto, and Francisco Lindor, among others. At the moment, the league-average ISO in 2021 is .157. Among Mets players with at least 10 plate appearances this season, only three out of 11 are above that number: Jonathan Villar (.217), Alonso (.200), and Dominic Smith (.200).

Is This A Good Thing Or A Bad Thing?

What’s transpired with the offense can be seen as a problem that needs to be corrected, but it’s also as a blessing. Hear me out.

Yes, the offense needs to gel and start producing like we think it should. However, expecting it to just happen when it seems like every other day there is a game postponement or something getting rescheduled isn’t fair. Baseball players are creatures of habit and routine, and once they’re able to play every day for a period of time without something unexpected derailing the schedule, it’ll come. This is also a blessing because it’s forced the offense to find ways to push runs across without the benefit of just hitting baseballs over outfield walls. Home runs are great, but being dependent on home runs isn’t necessarily a foolproof strategy to success.

There will be plenty of times when the offense has to pick up the pitching and vice versa. It only looks more pronounced now because the season just started. When good teams aren’t firing on all cylinders, they still find a way to make it happen. For right now, that’s exactly what the Mets have been able to do.

The post Mets Finding Success Without Firing on All Cylinders Yet first appeared on Metsmerized Online.