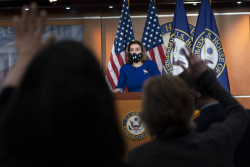 On November 8, 2016, Nancy Pelosi told interviewers she had complete confidence that Hillary Clinton was about to be elected president. Having been House Speaker from 2007 to 2011, she had the distinction of having held the highest rank of any woman in United States history, but "I'm counting the minutes to relinquish that title."

After the Buzzer! – Vipers Close Out Season With 3rd Straight Win