A recent arrival to the island has travelled much of the world creating art that disappears in 24 hours. Alix Norman meets a man who is putting a new spin on the island’s beaches

Last winter, the Sandman moved to Cyprus. His talents have not gone unnoticed. For the past four months, hundreds of coastal strollers, sea swimmers, and sun worshippers have chanced upon his vast, beautiful artworks – all carved into the golden beaches of our island.

From swirling patterns to tribal designs, life-like portraits to depictions of modern day heroes, these ephemeral artworks are a labour of love for Andy Coutanche (a.k.a. the Jersey Sandman). Having etched his way from New Zealand to the Maldives, Bermuda to Scotland, and on around the world, he’s been featured on the BBC, in The Independent and The Sun, worked for charities such as The British Heart Foundation and advertisers including Visit Jersey, and ultimately brought joy to thousands around the world… using no more than a good sense of spatial awareness and an exceedingly old rake!

“It’s my great-grandfather’s rake,” Andy laughs. “It’s been in the family for years, and has now travelled round the world with me! Years ago, when I first started the sand art, I replaced the wooden handle with a telescopic rod, so the whole thing fits neatly into my luggage. Or into a bag. So when I’m done with an artwork, I can just pop it away and sit there quietly without anyone guessing I’m the artist. I love to watch people’s reactions – the unexpected joy when they walk down to their favourite beach and discover the art. Children especially seem to love what I do – they treat it as an organic playground, getting in amongst the patterns and adding to it with their own footprints!” 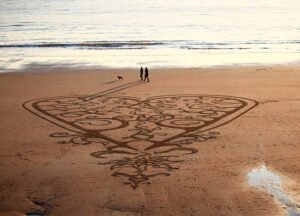 For such a renowned artist, Andy is the very opposite of affected. “Sand art is ephemeral; it rarely lasts more than 24 hours. You can’t be precious about it,” he smiles. “Back in Jersey, everything would disappear in a matter of hours – washed away by the rising tide. Here in the Mediterranean, the tidal range is lower. But still, the longest any of the artworks has lasted is three days. And that’s just how it should be.”

An avid surfer and a lover of all things marine, the 48-year-old has always seen the shoreline as “a blank canvas; a place of peace. In fact, the whole sand art thing began on a quiet beach in New Zealand. My brother and I had gone down to the coast for a quiet dog walk, and began discussing the design of a drop-keel yacht. We scratched out the plans in the sand using just a stick, and when we walked back up the dunes, the design really stood out. And I thought, ‘I could give that a go!’”

This eureka moment took place in 2005. 16 years on, Andy has built a global reputation as a sand artist. “It’s funny, because I’m originally a carpenter and joiner by trade,” he muses. “But now I’m moving more into artistic stuff – I do a lot of sculpture, working with fibreglass, wood and stone. Also resin art and glasswork. Light paintings too; you can write out a message on the beach and then go back at night and fill it in with lights or lamps or even sparklers, take a long exposure photo – it’s fantastic! I guess I’m a jack of all trades when it comes to artistic endeavour!”

The majority of Andy’s sandworks are made “purely for pleasure: it’s so relaxing, very therapeutic. You get into a bit of a zone, especially when it’s a freehand thing. Sometimes,” he adds, “I go down with a set idea, a simple paper sketch of what I’d like to draw. At others, I let the beach inspire me: using lumps or bumps, working in the rocks and stones. Yesterday, on Coral Bay, I found a smiley face scratched out by a child, and incorporated that into the design.”

But he also completes commissions: “It’s a very eco-friendly way to advertise, and of course you have the photos to remember it by. I’ve done corporate logos, huge QR codes, birthday messages, and more than a few wedding proposals,” he reveals. “I once did a proposal on a beach in England for a parachuting couple: the groom was a skydiving instructor, and had planned a tandem jump with his bride-to-be. He came down first, grabbed a bunch of flowers, and got down on one knee. She landed bang in the middle of the proposal, and immediately said yes!” 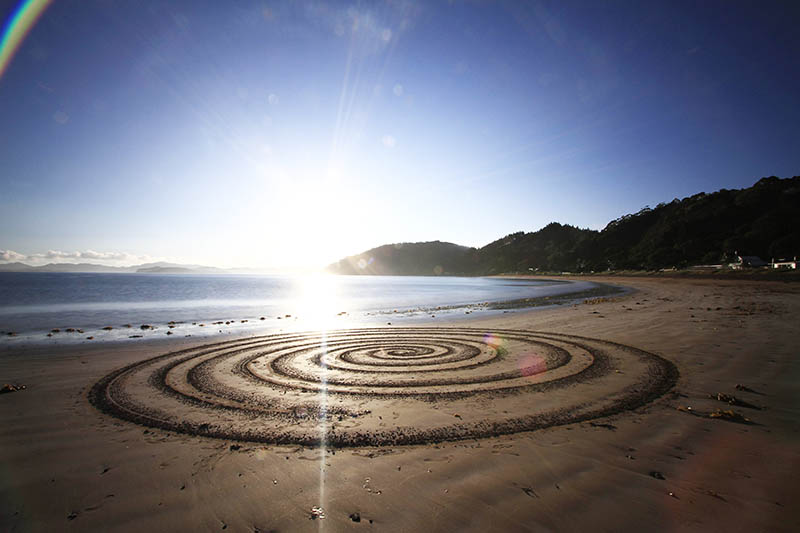 Andy also uses his sandart to raise awareness, often working with charities – “a lot for nursing, family planning, and veterans” – and local businesses, especially those involved in the environment and ocean clean-ups. “Every time I’m down on the beach, I’m cleaning – I’ve been trying to work out a sort of wire mesh attachment that will let me clean whole swathes of sand at one time; marine litter is a huge problem worldwide, and I want to do my part.”

But he still holds time and space for personal work as well. “In 2016, on Jersey’s Ouaisme Beach, I did a piece depicting three floating feathers. It was a tribute to a beloved family member we’d lost to cancer,” he says. “And it meant a great deal to me.”

The feathers piece was 70 feet in length, and took about 90 minutes. “It’s all done freehand – just my trusty family rake and my own footprints, no other props,” he reiterates. “And you can find yourself walking up to 10 kilometres, tracing out the design. Though here in Cyprus,” he adds, “the beaches – and consequently the art – is on a much smaller scale…

“Most of the pieces I’ve done over the last six months have been on Paphos beaches, including Coral Bay and Sandy Bay, because we’re based in Peyia. The lockdown means I’ve stayed local,” he continues, “but during the measures, my sandart has made for great exercise and excellent therapy all in one. Yes, your back does hurt at the end of the day,” he laughs, “but you’re alone, you’re being creative, and you’re doing something that’s going to bring joy.

As measures ease, Andy is looking forward to going further afield. “I hear there are some amazing beaches in the Famagusta region, and I’d love to see what I can do there. For the moment, though, I’m still finding my feet on the island – I’ve been fortunate enough to travel all over the world, but always intended to settle down here. Now I’ve done it. And I guess I’d better change my name – I’m the Cyprus Sandman now!”

'The tent is about to collapse': CNN's Erin Burnett details warnings from inside GOP about Cheney ouster

Housing Sales Are Booming, But Many Americans Can't Pay Their Mortgage