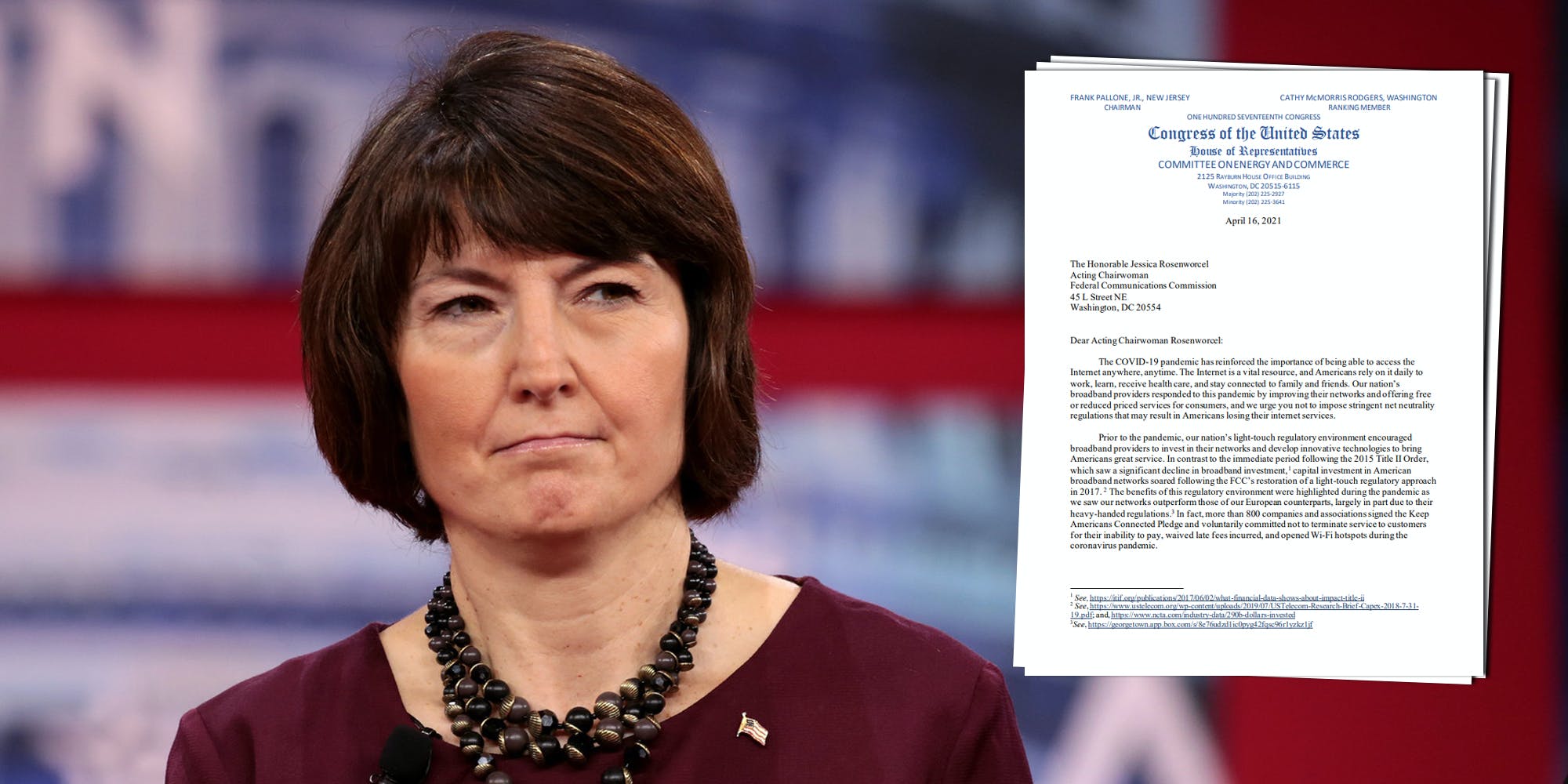 While nothing has been officially announced yet, it has long been assumed that the Federal Communications Commission (FCC), soon to be under Democratic control, would seek to reverse the agency's 2017 repeal of net neutrality rules.

President Joe Biden has the ability to give Democrats a majority at the FCC—which he has yet to do—that would give the party a 3-2 advantage for votes on major issues like restoring net neutrality under Title II of the Communications Act, giving the agency authority over broadband providers.

While Biden may be dragging his feet with the nomination of someone to fill out the FCC, Republicans in the House of Representatives are signaling their opposition to a restoration of net neutrality.

On Friday, a group of 26 Republicans, led by Rep. Cathy McMorris-Rodgers (R-Wash.) and Rep. Bob Latta (R-Ohio) sent a letter to acting FCC Chairwoman Jessica Rosenworcel where they said they opposed a return to "stringent net neutrality regulations."

Rosenworcel has been vocal in her support for net neutrality and pushed back against the FCC's repeal.

The Republican letter is filled with numerous arguments made against net neutrality rules for years, specifically claiming that "light-touch" regulation leads to more broadband investment. That argument has been highly criticized and debunked by net neutrality advocates.

The letter also touts internet service providers (ISPs) who signed onto former FCC Chairman Ajit Pai's "Keep Americans Connected Pledge," which asked companies to voluntarily pledge not to cut Americans off from their internet service for a handful of months during the pandemic.

Similarly, the pledge—because it was non-binding—has been highlighted by net neutrality advocates as a reason the FCC needs to have authority over broadband providers. With Title II authority, the FCC wouldn't have had to ask for a pledge, they could have enforced the policy, experts said at the time.

The letter also laments that AT&T decided to cancel its zero-rating plans in the wake of California being able to enforce its net neutrality law that was passed in the wake of the FCC's repeal.

The letter is a collection of many of the old arguments that have permeated the Title II net neutrality debate for years, but it does present an opening salvo in what could become the next round of the net neutrality fight in Washington, D.C.

While the House Republicans sent their letter to Rosenworcel at the FCC, there's also the possibility of net neutrality making its way through Congress at the same time.

If Congress also takes up a net neutrality bill—which Sen. Ed Markey (D-Mass.) has promised is forthcoming—you can expect the same list of arguments to be brought up by Republicans during those hearings.

Democrats' last attempt at a net neutrality bill died in the Republican-controlled Senate, but it could pass with the Senate and House now controlled by Democrats.

Ciara Celebrates Mother’s Day by Revisiting ‘I Got You,’ Featuring Baby Future