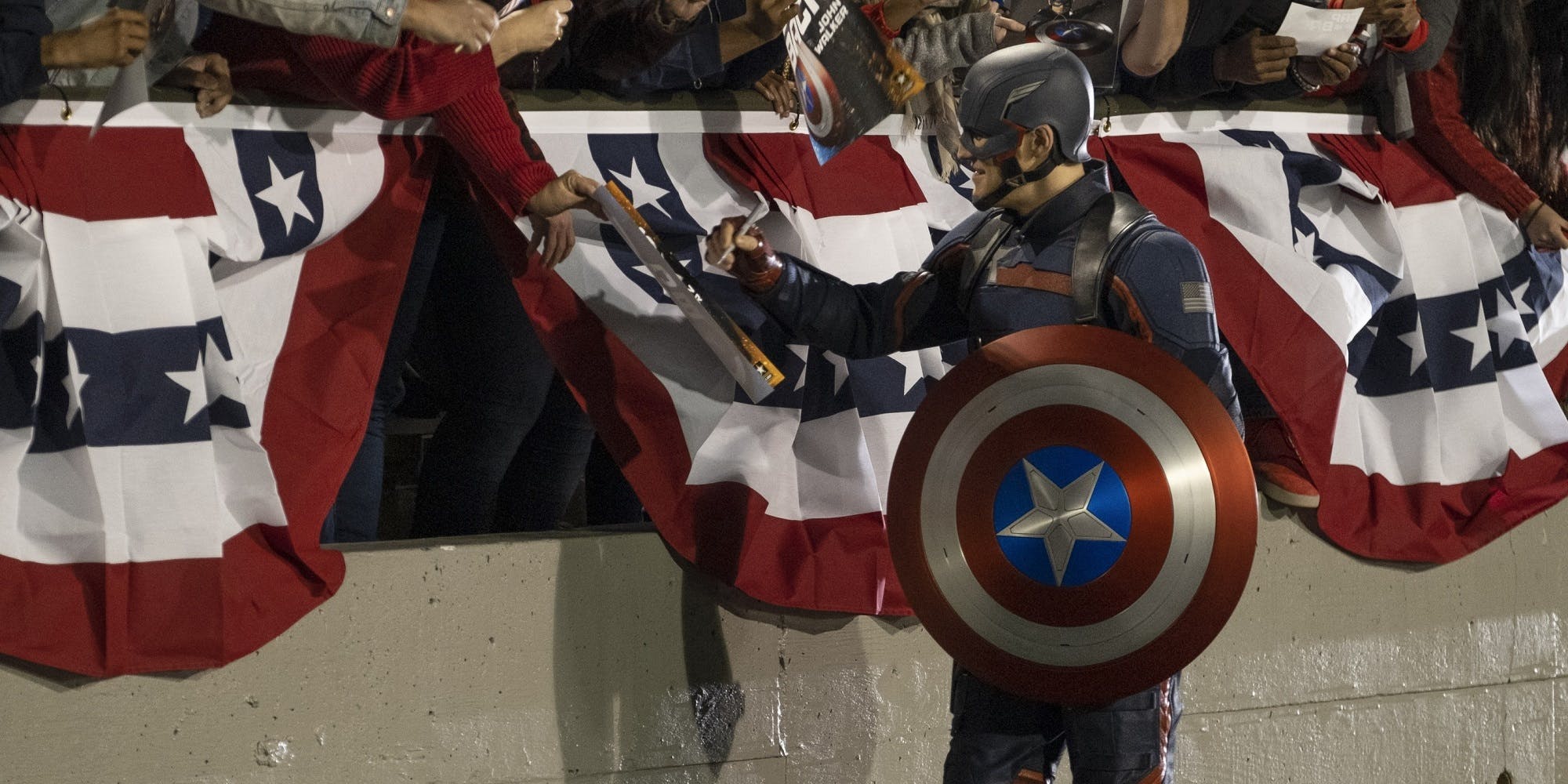 Marvel loves MacGuffin-based storytelling. A significant portion of the MCU revolves around the Infinity Stones, a series of props that rarely hold much emotional weight. Of course, MacGuffins don't have to be interesting in themselves. That's kind of the point. But right now, The Falcon and the Winter Soldier is making a compelling case in favor of Captain America's shield. That glorified frisbee is far more compelling than some of the apocalyptic superweapons we see elsewhere in the MCU.

In a practical sense, the shield is only valuable as a chunk of vibranium. Its real power is symbolic. The U.S. government could probably manufacture a decent replica, and anyone could independently declare themselves to be the new Captain America. But Sam, Bucky, and John Walker all care deeply about Captain America's legacy, so for them, only the real deal will do. They're actually more invested in that shield than its original owner, Steve Rogers.

Steve had an ambivalent relationship with his role as Captain America. Each of the Captain America films involve him abandoning the shield and/or rebelling against his own public image. The shield's symbolic value is more important to other people—particularly characters like Sam Wilson, Tony Stark, and Phil Coulson, who grew up with a mythologized idea of Captain America. And to Bucky, Steve was a bastion of moral certainty during some seriously tough times. In that context, The Falcon and the Winter Soldier is a story about two men transferring their grief onto an inanimate object. Sam and Bucky attach a lot of emotional baggage to the shield, to the point where neither of them are thinking very clearly.

John Walker's relationship with the shield

As for John Walker, his supervillain origin story came to a head in of episode 4. Fueled by frustration and self-doubt, he injects himself with the supersoldier serum. Soon after, he beats a man to death for killing his friend Lemar Hoskins. When he attempts to explain this to a military tribunal, he's shocked by their response: They immediately strip him of his title as Captain America, ordering him to return the shield. It is, we can infer, the first time he's experienced serious consequences for his actions.

Obviously, this storyline highlights the moral chasm between John Walker, Sam, and Steve. But it also proves that Walker didn't understand his "real" job in the first place. Like Steve, he was originally hired as a PR stunt. His introductory scenes directly mirror the propaganda montage in Captain America: The First Avenger, when Steve is sent on a publicity tour with a troupe of dancers. John Walker's mission is to look good for the cameras and defeat an enemy (the Flag-Smashers) that the U.S. government wants to handle in a public manner. By violently killing someone in front of civilian witnesses, Walker creates a PR disaster. And he seems genuinely shocked that his superior officers care more about the optics than any motives he might have had. After all, we can assume he killed other people in his capacity as an Army Ranger.

Back in the 1940s, Steve Rogers saw himself as a normal person who just wanted to do the right thing. "Captain America" was a character he played onstage, and while he was frozen in the Arctic ice, he missed seven decades of people mythologizing that character into an iconic superhero. Meanwhile, John Walker sees "Captain America" as an official title that can be bestowed upon someone by the U.S. military. He wants to prove himself worthy by completing his mission and destroying the Flag-Smashers. By contrast, Sam Wilson engages with Karli Morgenthau on a personal level, acknowledging the idea that she might not be the enemy after all. When Sam takes back the shield in episode 5, the show draws a direct line between his choice to become Captain America and his conversations with Isaiah Bradley. He faces up to the flaws in the system and decides to represent a different, independent kind of American hero. It's a moral journey that John Walker simply isn't interested in taking.

The Falcon and the Winter Soldier's political narratives are pretty uneven, but the shield-related conflicts are one of the strongest parts of the show. From an outside perspective, feels ridiculous for these men to care so much about a collectors' item. But thanks to a wealth of backstory in the MCU, there's some real emotional depth to the way Sam, Bucky, and Walker react to the shield and everything it represents.

The post Why Captain America’s shield is the MCU’s best MacGuffin appeared first on The Daily Dot.

What is The Handoff podcast with Chris Cuomo and Don Lemon?