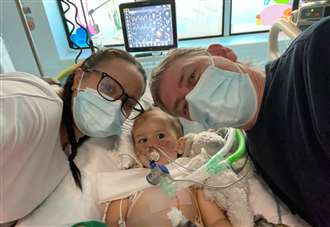 Parents of a two-year-old from Dartford say they are cherishing every "small win" as their "warrior princess" recovers from major brain surgery.

Little Isobel "Izzy" Windget faces more than a year-and-a-half of chemotherapy after frequent headaches turned out to be a brain tumour.

The toddler was placed in an induced coma after a biopsy identified an infection in her lungs.

The "warrior" tot underwent complicated surgery to remove part of the tumour, but she will require more treatment in addition to further rounds of chemotherapy lasting more than 80 weeks.

Parents Lauren, 35, and Colin, 49, of Colney Road in East Hill have temporarily relocated to Great Ormond Street hospital in London to be at her bedside.

Their daughter is currently immobile, has lost chunks of her hair and is unable to speak due to a tracheotomy.

"Izzy walked into the hospital on a Monday and by Thursday she could not move," said mum Lauren. "We've not heard her voice since then."

The mum-of-three described the heartbreaking moment her youngest daughter tried to communicate with her.

"I saw her mouth say 'mumma' but with the trachy she couldn't make a sound," she said.

"It was heartbreaking, there was nothing that came out."

Izzy has been given an 84-week chemotherapy plan, something mum Lauren says will prove an "absolutely mammoth" journey that will define her childhood.

But the couple are remaining positive and have been assured their daughter, who is just months shy of her third birthday, is showing good signs of recovery.

Despite Izzy's struggles, Lauren says there are glimmers of hope and they are treasuring each "small win".

Last week, the two-year-old tot became more responsive with her facial expressions as she reacted to her favourite show, Disney's Tinker Bell, on her iPad.

So much so, mum Lauren says she has been known to throw a tantrum when it's switched off.

"It is horrible to see her upset but also nice we are seeing the same Izzy" she said. "She is totally there in her mind, it must be so frightening for her."

Lauren added: "This is all very much a long waiting game. From one day to the next we don’t see big changes.

"But when we look back over the weeks, we do see she’s come a long way."

Lauren, who is the former landlady of the Royal Oak pub in Spital Street, went onto describe the struggle they faced getting a diagnosis for Izzy's condition.

"She had been in A&E a few times and admitted to hospital," Lauren said after Izzy first fell ill a year ago.

"But as far as anyone could see toddlers didn't get headaches and I was looked at like I was nuts."

It was only when Izzy's right eye turned inwards and an MRI scan was carried out they managed to pinpoint the tumour.

Long hours spent at the hospital have also taken its toll on family life with the couple's other two young daughters, Penny, eight, and Jessica, six, temporarily living with Lauren's brother and grandparents.

"We can't thank the family enough," said the mum-of-three. "I can’t be with all my babies at once and I couldn’t tell you when I will have them all together again.

"We miss them and they miss us but with what's going on with Izzy they have been in the best place."

Lauren also praised the staff at Great Ormond Street who she says have been "amazing" throughout their stay.

But she finds the current living arrangements difficult, which see her pulled away from her daughter's bedside each night.

"I hate having to leave her at night," said Lauren. "It is not an environment we can stay in 24 hours. There are no chairs there and you have to get out the way for nurses."

But Lauren hopes if all goes to plan Izzy will soon be transferred to a more comfortable ward where longer stays are permissible.

In the meantime, she has been keeping friends and family informed of developments via the Facebook page "Isobel's Army" which has more than 1,000 followers.

In a recent video update she posted a clip of the warrior tot's latest bout of surgical procedures, set to the tune of Christina Aguilera's "Fighter".

Izzy, two, from Dartford is recovering from surgery to remove brain tumour

With costs mounting for her potential needs in the future, godmother Becca Casey, who lives in Yorkshire, has also set up a fundraiser to help the family. So far it has amassed more than £3,000.

Izzy will likely need a portable ventilator, oxygen canisters, suction machine, and an emergency tracheotomy box, among other expensive apparatus.

Dad Colin works as a delivery driver for a butcher's in Swanley Village but is currently on furlough and so Lauren says they have been incredibly grateful for any support they have received.

"I can't believe how much support Izzy has got, it has been incredible to see," she said. "I did one post and it snowballed from one person to the next."

To see updates on Izzy's recovery click here. You can also contribute to the fundraiser here.