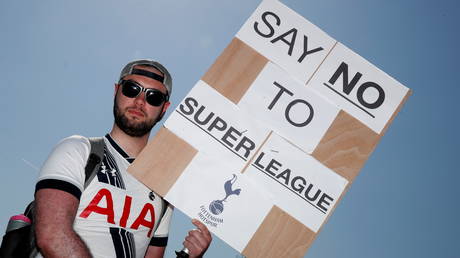 UK Prime Minister Boris Johnson has joined in the condemnation of plans to set up a separate competition involving a dozen of Europe’s top football clubs. The idea is bad all-around, he argued.

Johnson said he will work with football authorities to oppose the creation of a breakaway European Super League (ESL).

“I don’t like the look of these proposals,” the PM said, adding that setting up ESP will be “very damaging for football.” Johnson said it is important for football clubs to have links with fans in their hometowns, and the government will hold consultations on how to respond.

Among the rogue league’s 12 founding members are English clubs Arsenal, Chelsea, Liverpool, Manchester United, Manchester City and Tottenham Hotspur, as well as top Italian and Spanish clubs like Real Madrid, Barcelona, Juventus and AC Milan. The participants said the new tournament was a response to the disruption caused by the Covid-19 pandemic, and will improve the “quality and intensity” of existing competitions in Europe.

According to the Times newspaper, there would be an incentive of up to €350 million for each club to join ESL, and the new format will bring more money from television rights.

The move, however, quickly prompted a backlash from UEFA and several top national leagues, including England’s Premier League, Spain’s La Liga and Italy’s Serie A.

They released a statement slamming the planned rival competition as a “cynical project” based on greed and threatened to ban offending clubs from tournaments. The project was also condemned by fan associations of all six English clubs that have signed up for the ESL.

UEFA President Aleksander Ceferin told reporters on Monday that the idea to set up the ESL was a “spit in the face of all football lovers.”

The 12 founding clubs said in a statement on Sunday that they will govern the breakaway league themselves, and the inaugural season will begin “as soon as practicable.” Three additional founding clubs are expected to join, and five other teams will qualify annually based on their performance in the prior season.

Besides Manchester United and Real Madrid, founding clubs include Liverpool, Juventus, AC Milan, Arsenal, Atletico Madrid, Chelsea, Barcelona, Inter Milan, Tottenham Hotspur and Manchester City. They agreed to go forward with the plan despite threats of being banned from participating in their domestic leagues.

TikToker leaves ‘flirty’ Yelp review for her waiter, gets confronted by his girlfriend