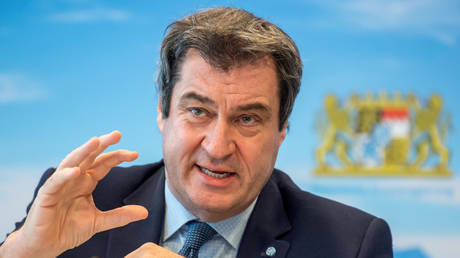 The leader of Germany’s Christian Social Union (CSU), Markus Soeder, has said his intention to succeed Angela Merkel as chancellor is really a matter for the wider Christian Democratic party (CDU) to decide upon.

“Where and how, the CDU decides alone,” he told a news conference in Munich on Monday.

The leadership hopeful said he would continue with his bid for chancellor as long as he is backed by a “large majority” of the CDU, the Bavarian CSU’s larger sister party. Soeder said he was “excited” about the prospect of leading the conservative coalition’s election campaign.

He revealed he had declined an offer from his chancellorship rival, CDU leader Armin Laschet, to attend a federal board meeting of the party because he did not want to “interfere” in the selection assessment.

Soeder maintained he had had several “good, friendly” conversations with Laschet, saying his rival would have the CSU’s “full support” if successful in his bid for Germany’s top job.

Earlier on Monday, Laschet invited Soeder to the top-level meeting in an attempt to see off his rival’s attempt to lead the center-right bloc into the September elections. Laschet said he intended to use the meeting of top CDU officials to break the deadlock.

“The goal is to win this election, and that will only be possible with a great deal of unity and a single candidate,” he told reporters in Berlin.

If Soeder does clinch the nomination, it would mark an unusual turn for the CDU-CSU alliance, in which the leader of the larger party is usually assumed to be the candidate to become chancellor.

On Monday, Germany’s Green Party also fielded its first-ever candidate for chancellor as it launched the campaign of Annalena Baerbock.

The left-leaning party is poised to make huge inroads at the next election, according to the most recent polling, taking 22% of the vote – second to the CDU-CSU bloc, on 29%.