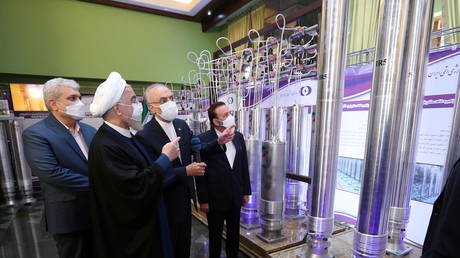 The EU’s chief diplomat has said there are positive signs coming out of talks in Vienna which would see the US and Iran rejoin the nuclear pact that former US president Trump ditched in 2018, introducing sanctions on Tehran.

Speaking on Monday, the European Union's top diplomat Josep Borrell spoke of willingness on both sides to rejoin the Joint Comprehensive Plan of Action which limits Iran’s nuclear ambitions.

"I think that there is real good will among both parties (Iran and the US) to reach an agreement, and that's good news," he said. "I think that both parties are really interested in reaching an agreement, and they have been moving from general to more focused issues, which are clearly, on one side sanction-lifting, and on the other side, nuclear implementation issues.”

The comments come as Iranian delegates continue discussions with world powers in Vienna. The talks aim to restore the 2015 nuclear pact which former US president Donald Trump unilaterally left in 2018. Tehran says it will only return to the agreement if Trump-era sanctions against Iran are removed.

Last week, Tehran said it would up its uranium enrichment to 60%, far higher than the 3.67% level agreed-on in the 2015 pact but less than the 90% level that is considered weapons-grade. The move came in response to an alleged attack on the Natanz nuclear facility, with Tehran claiming Israel was behind it.