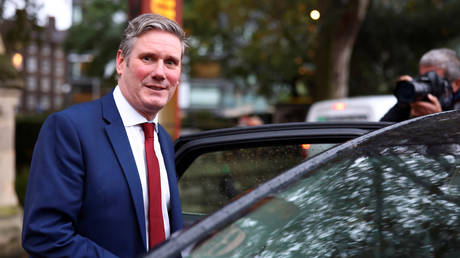 Labour Party Leader Sir Keir Starmer was dramatically kicked out of a pub in Bath by an angry licensee, who chastised him for supporting Covid-19 lockdowns.

In a series of videos published on social media, Monday, Starmer could first be seen arguing on the street with the landlord of The Raven, Rod Humphreys.

As Humphreys began to condemn Starmer for supporting the requirement that children wear a face mask in school, Starmer and his team attempted to bring the confrontation off the street by ducking inside the pub – a decision he likely regrets.

Keir Starmer is told to leave the Raven. The team ducked inside after a confrontation pic.twitter.com/UujAx8gnbd

According to Bath local news reporter Stephen Sumner, Starmer was in the city to express his support for high-street business, and the MP told reporters after the incident that “the vast majority of people” disagreed with Humphreys and “recognise that the lockdown was necessary.”

As to whether Starmer has permission to visit The Raven in the future, Humphreys said in an interview with the financial publication IFA Magazine, “No one comes into my pub without my permission, and he does not have my permission.”

Humphreys said he was physically stopped by Starmer’s security from entering his own pub while the politician was inside. Indeed, one of the videos shows a member of the Labour leader’s security team restraining Humphreys at the entrance to the establishment.

Pubs in England were permitted to reopen as part of the second stage of the government’s lockdown-lifting plan last Monday, but can only provide service outside. Up to six people or two households can currently meet outdoors, but not in a private home.

From the third stage of reopening on May 17, pubs and restaurants will be able to serve customers indoors. Should cases of Covid-19 remain low, all legal lockdown restrictions should be lifted by late June.