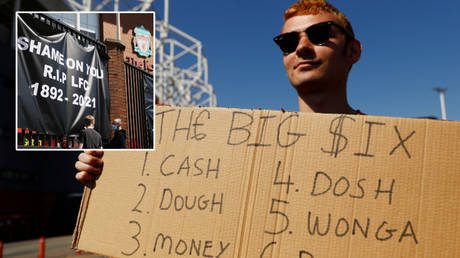 Irrespective of how they play out, the plans for a European Super League are a grim symbol of the rampant capitalism and avarice that the world needs less of, let alone its most popular sport. Let this mess finally stem the greed.

For anyone doubting the conviction of a press statement fired out shortly before midnight on a Sunday, the claims put forward by the leaders of the European Super League, littering their self-aggrandising announcement with promises so vague and hollow that it was a wonder why they bothered, did not disappoint.

A sentence after boasting that the toxic 12 would each receive around $4.2 billion to "support investment plans" and deal with the damage caused by the pandemic, Florentino Perez, whose structural changes at Real Madrid have included amendments to make the practicalities of removing him as president almost impossible, was quoted as saying that this dazzlingly tone-deaf idea will "help football at every level" and "take it to its rightful place in the world".

Football will be in the near future on a brink of complete collapse. Nobody is thinking about the bigger picture, only the financial side.

I still believe we can solve this unpleasant situation.

"It's a disgrace, it's embarrassing, and it goes against everything that football is about."

Some strong feelings about the European Super League from our panel.

The prevailing trains of thought are that this is either a horrendous misstep – alienating fans, creating a league no-one really wants and even offering the very real risk that players will be banned from competing in competitions such as the World Cup – or a knowing act of grotesquely theatrical, maniacally misguided brinkmanship that is effectively a blueprint, to forever be repeated whenever clubs want to supercharge their negotiating power over Champions League broadcasting money.

In a world of endless, divisive arguments over VAR, footballers' standing as role models and the glutinous wealth that has already made the upper echelons of the sport deeply unappealing in so many ways, this fiasco has achieved a minor miracle in uniting everyone outside of the bravado businessmen behind the bluster. That the protagonists cannot comprehend why that would be the natural outcome is a tragi-comedy all of its own, and testimony to how utterly incapable they are of envisaging how poisoned the game has become to a soundtrack of pockets being relentlessly lined.

Kids grow up dreaming to win the World Cup and the Champions League - not any Super League. The enjoyment of big games is that they only happen once or twice a year, not every week. Really hard to understand for all football fans out there...⚽????

“We will help football at every level,” Florentino Pérez, Real Madrid president & 1st #ESL chairman. No you won’t. You’ve run out of training grounds to sell. It’s all about greed. Real are a great historic club and, like the other Founding Clubs, should not be stooping this low.

Much of the fury has justly been directed towards the clubs, none of whom will be able to regain their reputation with the people and communities they have betrayed with this brazen power grab, to use the term that has flowed as freely as the most familiar of cliches over the last 24 hours. A finer understanding of the driving motivations behind this situation, though, requires some insight into the characters involved.

The roll of dishonor of AC Milan's new owners, Paul Singer and Eliot Management, was described in dispiriting detail by attorney Tammi Gaw as news of the plans broke.

I presume these Super League 'founder' clubs who have installed Florentino Perez as chairman know he changed Real Madrid statutes to make it virtually impossible for him to be challenged as president. Do they know that?

Now very clear that 12 Euro Super League 'founders' will try to use promise of €10bn solidarity over 23 years as sell to govts, EU, domestic leagues. Sad to report that clubs, according to sources, are 'committed' to breakaway

Gaw outlined how the venture had bought cut-price bonds in Argentina after it defaulted on its sovereign debt, then successfully sued the country in US and UK courts, to the extent that they seized an Argentinean naval ship docked off the Ghana coast as part of a $1.5 billion judgement.

Singer, said Gaw, had already adopted a similar ploy in Peru and went on to claim $127 million against the Democratic Republic of Congo, aiming to buy debt owned by corrupt regimes and capitalize on money that could have been spent on citizens.

????| The players who participate in the Super League WON'T be allowed to play in World Cup 'Qatar 2022'. @MirrorFootball #rmalive

At Manchester United, executive vice-chairman Ed Woodward is a former investment banker with JP Morgan, the American financial giants who have been revealed as stumping up the financial clout for the new $6 million league.

Andrea Agnelli, of Juventus, is a billionaire who insisted that he had "never seen, never discussed" a document purportedly putting forward the ESL suggestion in 2018, adding that he would help UEFA shape the future of the game.

To do this in the midst of a pandemic, when fans can’t even protest in their own stadiums, can’t have their voices heard, makes it even more cowardly and vile.

Newly-resigned as President of the European Club Association, for whom he was meant to represent 246 members, Agnelli's words in the preposterous press release are so baffling that it is hard to stifle a laugh.

He is right to mention a "critical moment", but that language of urgency should be shouted from the rooftops, in and beyond football right now, in order to be able to see past pure financial gain and find a balance that is not limited to billionaires and their reliably myopic interests.

The project is financed by J.P. Morgan with €3.5bn paid up front to the 15 founders, although the clubs and the clubs alone intend to be the shareholders of the European Super League

As if to hammer home the ridiculousness of the supposed reasoning behind the ESL, Agnelli went on to mention a "sustainable footing for the long-term future", "solidarity" and, lest anyone's cynicism not be at full throttle, "engaging role models" for "fans and amateur players".

Talk of billions of dollars being distributed to a dirty dozen clubs is the exact opposite of what people want to hear at a time when the gulf between the rich and the poor is wider than ever. Football should be showing its conscience, focusing on the bountiful potential of the game to restore hope, inspire people and become a force for good, not another dispiriting emblem of rabid money-chasing.

So which player from a #EuropeanSuperLeague club will be 1st to stand up for their sport, stand up for what’s right and stand up to their employer? Big call, challenging paymasters, but if they have principles + prevented from representing their countries, they need to speak out.

Smaller clubs – like many organizations and jobs – have gone to the wall in greater numbers than ever before in the last year. They could have been saved with the tiniest fraction of the riches that these owners and clubs command, yet here we are using the codewords of the "wider football pyramid" as a means to swell revenues and net worths. With each official statement by these famous, once-respected clubs, the absurdity of the rich getting richer while cutting everyone else off becomes less easy to brush aside as the nonsensical posturing that it is.

Just one of the many wearying aspects of the whole sorry shambles is that elite football clubs and players had not fared as badly at showing their power to enact positive change as many feared they would at the start of the pandemic.

Statement from 12 Football Clubs in some European countries:
Why be good when you can be rich

can we all agree capitalism is bad now

Manchester United and Manchester City contributed to attempts to ease food poverty in their local areas. Chelsea earned respect and column inches for opening their stadium to NHS staff and encouraging players to support community initiatives. Marcus Rashford is only the most prominent of stars to have tried to use their voice and wealth to create change.

If nothing else, those moments of positive PR seemed to suggest that clubs were aware of and cared about the wider world, with optimists quietly speculating that this could pave the way to a much-needed cessation of an obsession with profit margins and a greater focus on the central role they can play so effectively in local communities.

“Our job is to maximize our revenues," a board member at one of the clubs was quoted as saying by Sky Sports today. "The wider good of the game is a secondary concern." As unlikely as it seems after the surreal circus of the last day or so, you can only hope the greedy stupor of that viewpoint will be consigned to the past in sport and society.