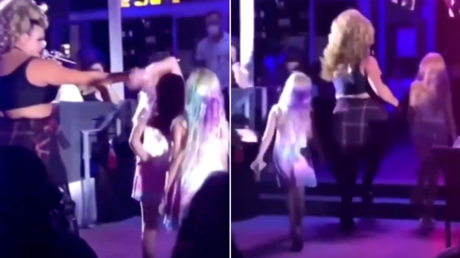 Footage from a drag show in Los Angeles is causing uproar on social media as it shows children posing for the crowd and being tipped cash.

“Why in the hell do these people got these f***ing little-bitty a** kids at this f***ing drag show,” the unidentified person in the video says, before a couple of young girls are brought out onto the stage.

The person filming notes it is nearly midnight. An adult drag performer can be seen encouraging the kids to take cash tips from the audience, as they direct the children in poses and take them on a catwalk.

The user who posted the video, podcaster Lindsay Platoshyn, followed up her tweet with a YouTube investigative piece on the trend of underage performers earning money at adult drag shows – a hot topic in recent years, and one that has become wrapped up in a larger debate about gender identity.

Critics online have expressed shock over the video.

“11.40pm. People giving money to children. This is insane,” another wrote.

I'm wrong for not wanting this tho https://t.co/a11lkpQzDG

When some Twitter users defended drag shows in general, saying many performers would balk at the idea of using children in their acts, Platoshyn pushed back saying, “Now is not the time to be ignorant.”

“The fact is it happened, and has been happening & no one is saying anything. Now is not the time to remain ignorant with our heads down, making random claims of ‘but the others are innocent!’ That’s entirely not the point,” she wrote.

I wouldn't speak for others in this scene, the fact is it happened, and has been happening & no one is saying anything.
Now is not the time to remain ignorant with our heads down making random claims of 'but the others are innocent!" that's entirely not the point.

All but one Republican lawmaker left the floor during Liz Cheney's speech against Trump, CNN reports

Not Fooling Anyone: Iran Tried to Pass This Russian Jet Off as New