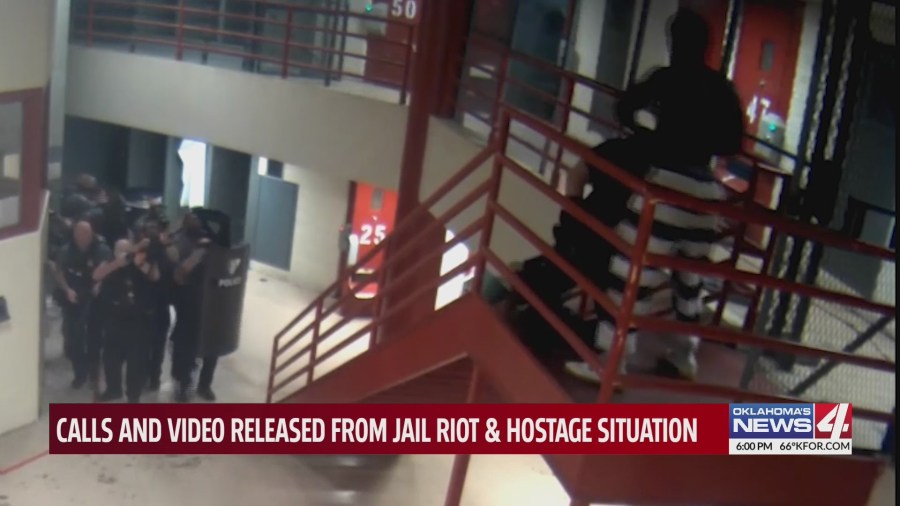 "I need Oklahoma City Police in the jail. The inmates have taken the keys, they have an officer hostage," the 9-1-1 call said.

"You’ll hear the stress and the anguish in her voice as she’s trying to get help," Chief Wade Gourley with Oklahoma City Police said.

In surveillance video, you can see the suspect get out of his cell and walk towards the detention officer, taking him down the stairs. He's brought onto a table and stabbed by another suspect.

Later, you see the original suspect holding the detention officer at the top of the stairs with a makeshift knife to his throat.

Family of inmate killed by police in hostage situation speaks out

Police say this is the makeshift knife that was used.

He says there should be a system in place at the jail to deal with these types of situations before they get out of hand.

"The Oklahoma City Police Department should not be a response team to deal with situations in the jail. That's not what we're designed to do. In this instance we had no choice," Gourley said.

Protestors were outside where the press conference was held, saying the inmate didn't have to be killed and calling for the resignation of the police chief.

"Why is it you didn’t negotiate long enough until that man was able to be dissuaded not to have done what he did?" Washington said.

"I respond with this video. That’s all I can do," Gourley said.

Will Joe Biden Lose the Arctic to Russia or China?

Paul Pogba: What I really think about Mason Greenwood at Man United