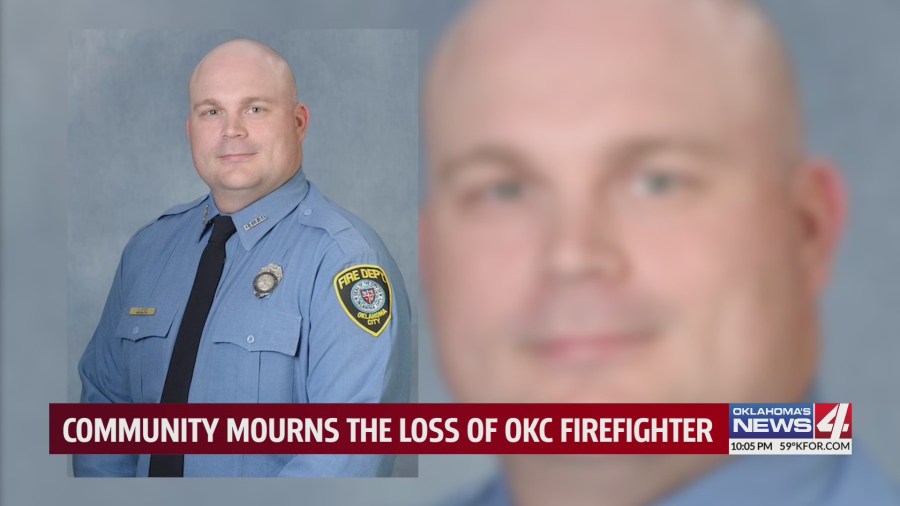 OKLAHOMA CITY (KFOR) – Friends, family and the community are mourning the loss of Oklahoma City firefighter Chad Hyde Friday after he died from injuries he suffered in a motorcycle crash.

“Sorry,” said David Bryant, a close friend of Hyde’s, as he held back tears. “This is how profound of an effect he had on my life while we were friends, so it says everything. He was a good guy.”

Hyde was a young father of two at 32 years old. Just two weeks after his birthday, he died after crashing his motorcycle at an on ramp to Interstate 35 in Moore.

“Ah man, he was super funny,” Bryant said. “Probably one of the biggest things is that he was kind.”

A woman named Shawna Peltzer was among those who saw the crash. Her husband rushed in to help.

“Give me my flashlight,” Shawna’s husband Shawn said as he opened their car door. “He’s hurt bad.”

Shawna Peltzer and her husband Shawn were driving along I-35 when the wreck happened. They decided to stop their car on the highway and try to help him.

“I saw him hit the dirt, gravel right over here, and I was like, 'I hope he catches it.' But then a big cloud of smoke engulfed him,” Shawna Peltzer said. “The next thing I know, he’s right in front of me on the road.”

Shawn tried to direct traffic while an ambulance rushed to the scene.

“I could hear him trying to breathe,” he said. “He was struggling.”

Shawn said he tried to talk to Hyde, but he was unresponsive. Hyde was rushed to the hospital where he died shortly upon arrival.

“I wish there was more I could do,” Shawn Peltzer said. “There was just nothing else I could do for him.”

Bryant learned the news Friday and is grieving the loss. He was best friends with Hyde, who he knew since middle school. Bryant said he received a call from Bryant just two days ago, hoping to catch up.

“I was actually real happy about it because I had wondered how he was doing,” he said. “We were supposed to reconnect and actually hang out.”

Even with Hyde gone, those who knew him, and even those who didn’t, remember him well.

“He was a firefighter a part of the community and I have great respect for our first responders,” Shawn Peltzer said.

“I’m extremely sorry,” Bryant said. “I know he must have been a great father, a great husband, and I know he’s a great son and he’s a great best friend.”

Hyde is survived by his wife and two young children.

Earth Day summit a chance for Biden to show US serious about climate: Trudeau