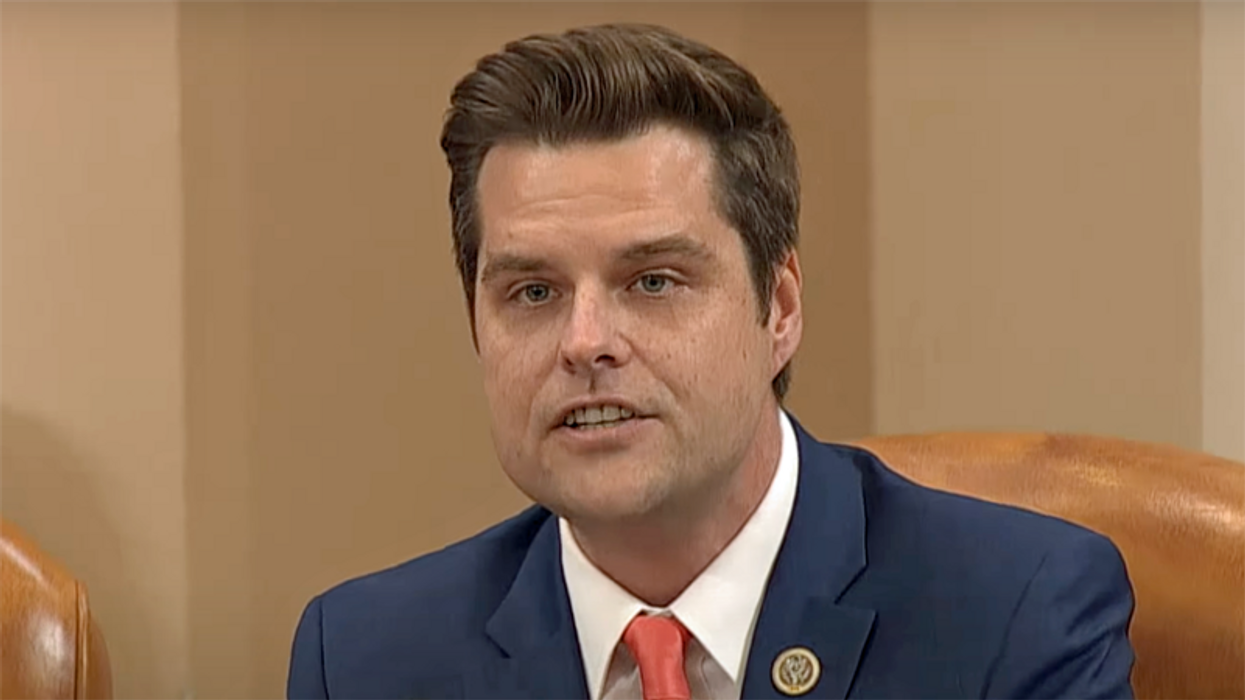 "If you've been paying very close attention to my oeuvre, you might have gleaned that I think Rep. Matt Gaetz represents almost everything wrong with the GOP and our politics generally," Goldberg wrote. "There was never anything personal about it. I've never had a conversation with him. I did see him at Fox's D.C. studio a few times, occasionally accompanied by a young woman in a very short, tight dress who—not to traffic in superficial stereotypes—looked like her purse probably contained a fresh pack of condoms, a portable credit card reader, and a recently refilled prescription of tetracycline."

Tetracycline as an antibiotic that is used to treat genital infections.

It seems at this point in writing his column, Goldberg broke out a very old thesaurus.

"Until this week, my objections to Gaetz were quite politically high-minded rather than comstockish or prudish. (I will say that even though I am only about a dozen years older than the guy, he does arouse—so to speak—my inner cranky old man and a desire to use grumbletonian language that is out of step with the times," he wrote. "Even if he's not a confirmed philopornist, he's certainly a crapulent cacafuego and coxcomb who, when not busying himself with organizing seraglios of slatternly driggle-draggles, serves as one of America's foremost rhetorical bescumbers.)

"Since the guy is a Playmobil-shaped pinata who can be bashed from almost any angle and yield some reward, I could go on. I just want to make one last point. Imagine for a moment he wasn't a sleazy cad. Assume he is innocent of the charge of sex trafficking. Conservatives and Republicans were still wrong to embrace and encourage this dude. In a sense, his alleged gross behavior lets a lot of people off the hook in the same way the January 6 siege of the Capitol let certain Trumpers off the hook. After January 6, some Trumpists got to argue, in effect, that Trump had been fine until this happened. But Trump wasn't fine on January 5, 2021, or in 2015," he explained. "Likewise, Gaetz was a boorish clown and demagogue who left a retromingent trail of bad cologne in greenrooms around town long before these revelations. But responsible people didn't care because he was good TV. And, thanks to his unrepentant sycophancy, he had the favor of Donald Trump. Pretending he shouldn't be on TV—never mind in Congress—anymore because of his louche extracurricular activities perpetuates the idea that his approach to politics was fine before these allegations surfaced. Indeed, we can be sure that if he survives the incoming frenzy, this human cold sore on the body politic will reappear on TV soon enough. But don't worry, they'll cover it with lots of makeup."

Liz Weston: How the pandemic has shaken up retirement

This giant roofing company just figured out how to recycle shingles