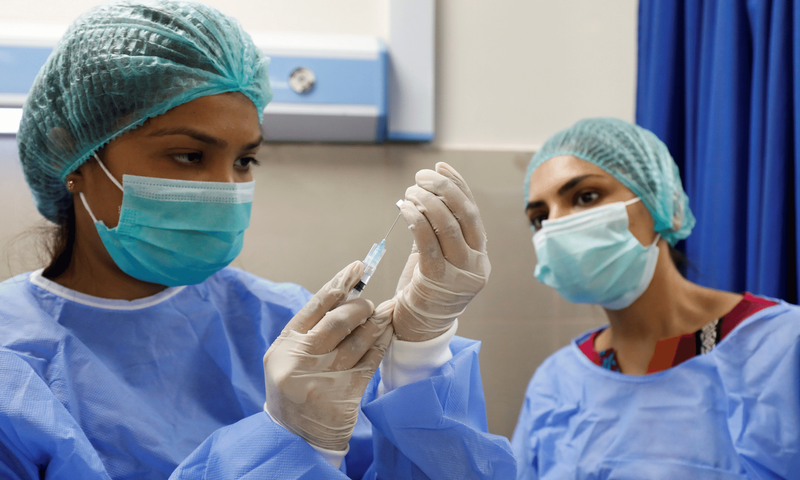 LAHORE: Covid-19 vaccine ‘scams’ brew at three state-run hospitals in the provincial capital as they allegedly ‘administered vaccine to unauthorised persons or wasted many vials’, causing embarrassment for the provincial government.

So far, such complaints have surfaced at Services, Jinnah and Mozang hospitals.

According to the initial information so far, nearly 1,400 doses of the vaccine donated by China have either been administered to the ‘unauthorised persons’ or gone ‘missing’.

These vaccines were provided to the hospitals by the federal government for the health professionals only.

Under the laid down policy, the vaccines were to be given to the registered health professionals only.

The National Command and Operation Centre (NCOC) is supposed to issue list of health professionals with their respective codes and the hospitals are to vaccinate them in accordance with the data.

Following the complaints, the Punjab government launched an investigation to dig out facts, a senior official in the health department told Dawn.

Seeking anonymity, he said the Services Hospital Lahore was facing allegation of administering the Covid vaccine to the celebrities, including parents of the ministers and other individuals of the ruling elite.

The vaccine was given during the tenure of former medical superintendent [Services Hospital] Dr Saleem Cheema who strongly denied the allegations.

Talking to Dawn, he said initially the vaccine was administered to the health professionals only.

He said the Punjab government periodically changed its strategy/policy and allowed vaccination to first 60 or above and then 70 and above senior citizens other than health professionals.

Recently, he said, it also allowed walk-in service and vaccination to 50 and above people.

Following this, he said, the Services Hospital during his tenure as MS [which expired on March 19] vaccinated the elderly people who visited the health facility with pin code.

“All the vaccine vials were available, stock and record of the used/empty vials was maintained”, Mr Cheema said.

He clarified that the elderly people other than the health professionals were vaccinated at the Services Hospital during his tenure as per policy of the Punjab government.

To a question, he said, the Covid vaccine mismanagement issue surfaced when the system of the NCOC got choked and the record of [vaccinated] people could not be incorporated into the system.

“And, interestingly, the system is still choked these days and hospitals and vaccination centres are facing problem in data entry”, the former MS said.

The issue was highlighted with some distorted facts and some elements portrayed it as if hundreds of doses [at Services] had gone missing or administered to unauthorised people, he said.

Meanwhile, the official source said the inquiry panel constituted by the Punjab government securitised the record of the Services Hospital on Thursday and grilled some admin officials and other concerned people.

Similarly, he said the Jinnah Hospital and the Government Teaching Hospital, Mozang, were also facing the issue of vaccinating the unauthorised people and wastage of the vials.

Meanwhile, the Mayo Hospital faced a serious issue when it ran out of Covid vaccines and the health professionals could not get jabs for the last three days or so.

Mayo Hospital MS Dr Iftikhar Ahmad confirmed to Dawn that the health professionals could not be vaccinated due to non-availability of the vaccine.

He said the Punjab government was trying it hard to get the new stock from the Centre and the issue would be addressed ‘amicably.’

To a question, he said more than 3,000 health professionals had been vaccinated at the Mayo Hospital and as many were awaiting their turn.

PML-N: The PML-N has questioned the efficiency of administration of Chief Minister Sardar Usman Buzdar over the 550 ‘missing’ shots of the Covid-19 vaccine from the Services Hospital.

“How come the corona vaccine disappeared from the hospital as it seemed that some ‘VIPs’ had been accommodated,” PML-N Punjab information secretary Azma Bokhari said in a statement.

She added that some 350 Covid vaccine shots had expired because of out-of-order freezers in Mozang Hospital.

“Inept Chief Minister Usman Buzdar is only busy in putting plaques on the projects of Shehbaz Sharif,” she said.

Chelsea verdict: Subdued Blues distracted by the Euro Super League.. how are they meant to play on amid chaos off field?