The longest and most absorbing form of the game is the pinnacle for international players – and the ICC have introduced a new format designed to make it even more exciting.

What is the ICC World Test Championship?

The World Test Championship is the ICC’s plan to give Test cricket a competition that can rival those in the one-day game.

Originally planned for 2013 but hit with long delays, the new-look competition is set to take place over nearly two years.

It started in August 2019 and finishes in June 2021, where two teams will contest a grand final.

The second edition of the tournament is scheduled to run from July 2021 to June 2023.

Does the England vs India series count in the standings?

Yes. The two sides are currently going toe-to-toe in the Sub Continent, with England winning the First Test in Chennai.

India need to win two of the four tests to qualify for the finals.

What is the ICC World Test Championship points table?

England are in a great position going into the finals, with 442 points and top of the standings as of February 9.

New Zealand, Australia and India are also in the top four, with India looking to fend off Pakistan for the fourth spot ahead of this summer. 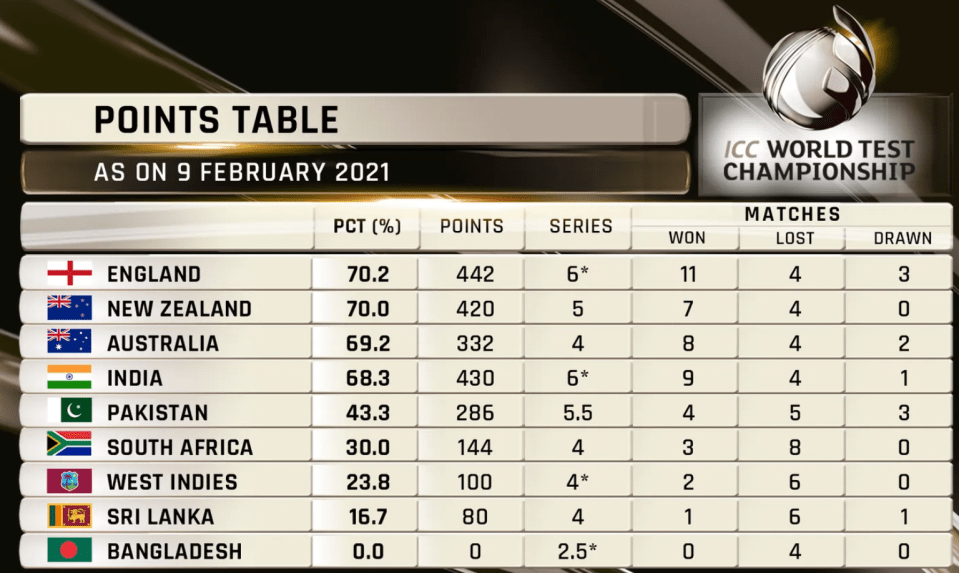 How do the points work?

During qualifying, teams get points for the finals as follows:

Do The Ashes count towards it?

Old enemies England and Australia do battle every two or three years – for the most fiercely-contested Test series in cricket.

The Aussies are the current holders after a comprehensive victory Down Under in 2017/18 followed up with a tied series in England in 2019.

But England visit Down Under in the winter of 2021/22, but this is AFTER the finals this summer, so only the 2019 series counts towards this current series.

This coming winter’s Ashes counts towards the next World Test Championship.

MOST READ IN SPORT

Who are England going to play?