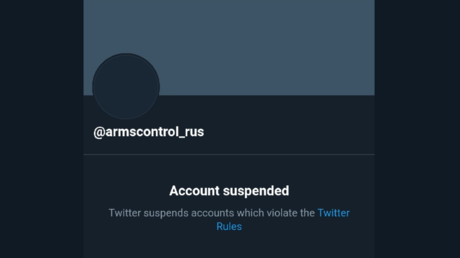 The Twitter account of the Russian delegation that represents the country at OSCE-hosted arms control talks in Vienna has been suspended by the US platform. The head of the team suggested it was an act of Big Tech censorship.

The unexplained ban of the account was reported on Saturday by Russia’s chief negotiator, Konstantin Gavrilov. He pondered what the reason for the decision might have been, suggesting it could have been retaliation for voicing Russia’s “alternative position … on the trends of the current [political-military] situation in Europe”.

On Feb 12, @TwitterSupport blocked the official account of the RUS Arms Control Delegation (@armscontrol_rus). What are the reasons? An alternative position of RUS on the trends of the current pol-mil situation in Europe voiced at the @OSCE Seminar on Mil Doctrines? @mfa_russia

Various arms control talks in Vienna are hosted by the Organization for Security and Co-operation in Europe (OSCE). This week, the body hosted a key forum called the High-Level Military Doctrine Seminar, which is gathered once every five years. The Russian military, surprisingly, snubbed the event, citing “unfriendly” Western policies, but the Gavrilov-led delegation participated.

The Russian official said he would be asking OSCE Secretary General Helga Schmid to join Russia’s demand for clarification from Twitter, which he otherwise expected to be unanswered. Meanwhile, his own account would be used to publish relevant content, he added.

Spotify defended paying Prince Harry and Meghan Markle for a podcast while musicians struggle to make money, but the couple isn't to blame