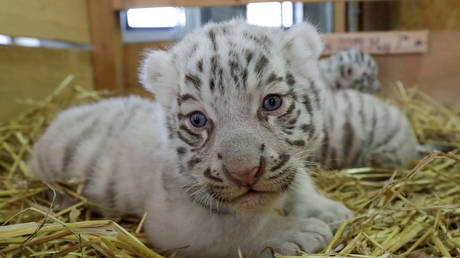 The two white tiger cubs that died last month in a Pakistani zoo had damaged lungs. The zoo now suspects that the animals may have contracted Covid-19 from a staffer that fed them.

The cubs were originally thought to have suffered from the feline panleukopenia virus, which targets the cats’ immune systems. However, an autopsy found that the animals' lungs were severely damaged, which led experts to believe they may have contracted Covid-19.

The tigers were not tested for the coronavirus, but the staff handling them was found to have been infected by Covid-19.

“After their death, the zoo administration conducted tests of all officials, and six were tested positive, including one official who handled the cubs,” Lahore zoo deputy director Kiran Saleem told Reuters.

It strengthens the findings of the autopsy. The cubs probably caught the virus from the person handling and feeding them.

White tigers are extremely rare. Their unusual color scheme is a result of a genetic mutation.

Last year, several lions and Siberian tigers tested positive for Covid-19 in the Bronx Zoo in the US. A Malayan tiger living in the zoo in Knoxville, Tennessee, has also been infected by the novel coronavirus. Officials said a group of big cats had been quarantined after exhibiting symptoms like “mild coughing, lethargy and decrease in appetite.”

Kanye West Spent Millions of His Own Money on Presidential Campaign

Warming up as we approach the weekend