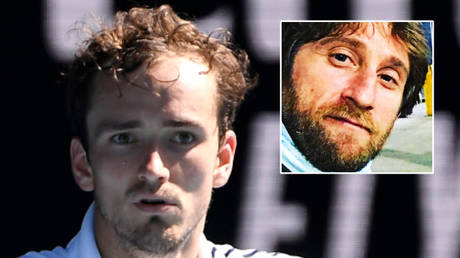 Russian contender Daniil Medvedev was involved in an extraordinary row at the Australian Open - then claimed his coach had assured him he was certain of victory despite bailing on him after he blew a two-set lead during a match.

Rattled Medvedev took the pressure out on coach Gilles Cervara as he faltered worryingly against Filip Krajinovic in the third round, shouting at his box after losing the third set and going 4-1 down in the fourth.

The fourth seed appeared to suggest that he would rather Cervara left than kept offering him unwelcome guidance on reviving his fortunes, causing his coach to reportedly grab his bag and leave Melbourne Park after interpreters said Medvedev had told him in French: "Can you just let me play?"

Despite Medvedev's failure to win on any of the previous six occasions when he had played five sets in his colorful career, the world number four insisted that Cervara's exit had not been a sign of low confidence in his prospects of hitting back against a resurgent opponent ranked 29 places below him.

Medvedev screams to whom I think is his coach: “will you let me play?”

Medvedev has been barking at his box since he dropped serve to lose the third.

Medvedev has been chirping to him in French all day and Cervara has had enough. He's picked up his bag and he's out of here. Medvedev vs Krajinovic looking bound for a fifth. #AusOpen

"He said just before leaving that he's sure I'm going to win the match, but he's going to leave to let me be more calm," the 25-year-old said after the fiery altercation.

"Sometimes maybe I will disagree but this time for sure it was a good thing to do. Today it helped and definitely we're going to talk about it a little bit, but there is not a big deal."

Fans were less convinced after watching temperamental Medvedev beat the Serb in style, winning the deciding set 6-0 as Cervara's banishment appeared to have the desired effect.

Medvedev when asked about his coach leaving during the fourth set:

“He said just before leaving that he’s sure i’m gonna win the match but he’s gonna leave me alone to be more calm"#AusOpen pic.twitter.com/xkGcblVKlb

Danil Medvedev is not respectful at all... you fight with your own coach and pressure him till he walks out ... between him and Djoker don't know who is worse #AusOpen

So let me get this straight, did Medvedev kick his coach to the curb becuase he felt he was being coached during the match or because his coach had too much confidence in him? I'm not understanding... #AO2021

"Danil Medvedev is not respectful at all," said one. "You fight with your own coach and pressure him until he walks out. Between him and Novak Djokovic, I don't know who is worse."

Another asked: "Did Medvedev kick his coach to the curb becuase he felt he was being coached during the match or because his coach had too much confidence in him? I'm not understanding."

One critic blasted: "I’ve said it all along: tennis players are petulant, spoilt rich kids. These temper tantrums only add to my thinking."

What’s going on between Medvedev and his coach? ????????#AustralianOpen pic.twitter.com/twsq0TfR7e

I’ve said it all along, tennis players are petulant, spoilt rich kids. These temper tantrums only add to my thinking.

Thiem - Without his coach, had a bad preparation

Medvedev - Obv favourite for this slam for now. pic.twitter.com/NxKj1tQN9h

With top seeds Novak Djokovic and Rafael Nadal facing injury concerns in the first week, Medvedev will feel he has an excellent chance of winning the Grand Slam - but his clash with Krajinovic was a demandingly eventful one.

The ATP Finals winner frequently showed his frustration in French, Russian and English, received a medical time-out during his fourth-set struggles after complaining of buttock pain and was unhappy with the spider camera that is used to produce footage of matches, shouting at one point: "This Australian Open sucks."

He later admitted that his occasional emotional outbursts do not "help me to play good", adding: "Now I think I have made big steps already working on my mental strengths."