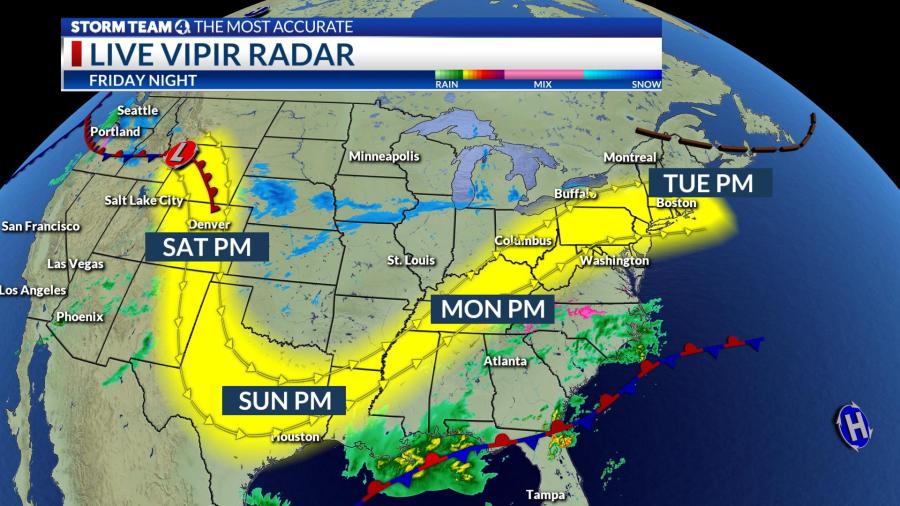 Skies will be mostly cloudy this weekend, with some intermittent light snow showers. An upper-level wave crossing the Great Lakes will bring light snow at times to northwest Ohio, with few snow showers in the central part of the state.

A southern system will track far enough south and east of Ohio to keep significant moisture away, but a little freezing drizzle in the southeastern counties could create a few slick spots. Along the Mid-Atlantic coast, low pressure will form and coat roads with snow and ice from Virginia and eastern West Virginia to southern New England.

Drier, colder air will filter in behind the low-pressure areas Sunday, as the pool really frigid air remains over the Upper Midwest but sagging slowly southeast. Temperatures this weekend will start off in the upper 20s and low 30s Saturday, then fall back into the low to mid-20s Sunday and the upper 10s Monday.

A stronger low-pressure system will develop over the western Gulf of Mexico later Sunday and turn northeast along the western side of the Appalachians, bringing periods of snow, beginning early Monday across Ohio. A second wave of moderate to heavy snow is likely later Monday, ending by daybreak Tuesday. At least several inches of snow are likely, impacting the commute.

The cold will be reinforced through the first half of next week. Yet another storm could bring snow and a wintry mix Thursday, with gradually moderating temperatures.

US in delicate balancing act as Saudi prince spared sanctions

‘Be ready in June’: Chimaev targets rival for comeback as he thanks UFC for ‘first-class’ Covid treatment

I'm still so emotional about Netflix's 'Fate: The Winx Saga'