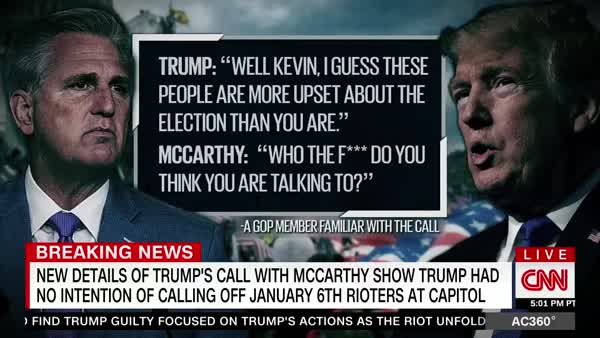 As the fourth day of Donald Trump's second impeachment trial wrapped up, CNN reported shocking new details about the January 6th insurrection on the Capitol. They report that there was an "expletive-laced phone call" with House GOP leader Kevin McCarthy while the rioters were actively attacking the Capitol and shocking no one, Donald Trump gleefully told McCarthy that the "rioters cared more about the election results than McCarthy did."

According to CNN, the conversation went like this: "Well, Kevin, I guess these people are more upset about the election than you are."

To which McCarthy replied, "Who the fck do you think you're talking to?"

This came right after McCarthy told Trump that the rioters were Trump supporters and "begged" him to call them off.

Trump's nonchalant reponse set off a shouting match between the two men, with Donald Trump gleefully watching his terror unleashed on the lawmakers that he felt had betrayed him while Kevin McCarthy was under literal attack and fearing for his life in the Capitol. Reportedly, McCarthy told Trump that the rioters were breaking into his office through the windows, and asked him, "Who the f--k do you think you are talking to?" after his mocking response. This is according to a GOP lawmaker familiar with the call.