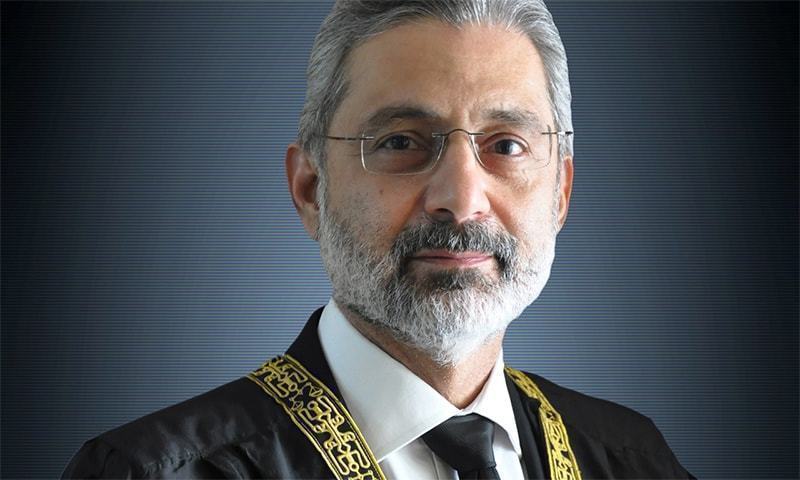 ISLAMABAD: Members of the legal fraternity from Balochistan on Friday expressed concern over the Feb 11 Supreme Court order, which banned Justice Qazi Faez Isa from hearing any case against Prime Minister Imran Khan, and said no curb should be placed on the constitutional rights of a superior court judge and demanded that the restriction be removed at once.

Senior member of the Pakistan Bar Council (PBC) Munir Kakar and vice chairman of the Balochistan Bar Council (BBC) Qasim Ali Gajaizi and the chairman of the executive committee (BBC) in a statement regretted that such a directive was against legal and constitutional principles, especially when a 10-judge Supreme Court bench had already quashed the presidential reference filed against Justice Isa — a reference which they said was based on malice.

On Feb 11, a five-judge bench of the Supreme Court headed by Chief Justice Gulzar Ahmed had issued an order banning Justice Isa from hearing cases involving Prime Minister Imran Khan, stating that he (Justice Isa) had already filed a petition against the prime minister in his personal capacity against the proposed plan to distribute Rs500 million development fund each among PTI lawmakers.

The Supreme Court order said that in order to uphold the principle of impartiality, Justice Isa should not hear cases involving the prime minister. A statement issued on behalf of the prime minister had, however, termed media reports about development funds incorrect.

The order had recalled how Justice Isa during the hearing placed on record photocopies of certain documents received by him from some anonymous source through a WhatsApp message, the copies of which were also handed over to other members of the bench as well as Attorney General for Pakistan (AGP) Khalid Jawed Khan.

Though Justice Isa had observed that he was unsure if the documents were genuine, the AGP had submitted that since the authenticity of the documents was questionable, the same may not be taken on record but in any event Justice Isa would become a complainant in the matter and in that capacity it would not be appropriate for the judge to hear the matter.

The SC chief justice, therefore, observed that in these circumstances it would not be proper for Justice Isa to hear the case.

Reacting to the Supreme Court or­­der, former vice chairman of the PBC Abid Saqi cited the 1989 judgement of the Sup­reme Court in which it was held that one set of judges of a constituted bench could not issue a directive to the other bench or any of the judges of the bench, not to hear a matter.

While dealing with the issue of bias, former judge Abdul Kadir Shaikh, a member of the then 12-judge Supreme Court bench, had held that one judge of a division bench could not direct the other judge or judges of the bench not to hear the case on the ground that he had a bias or an interest in the case or for that matter on any other ground, whatsoever.

Though it was a minority view, it still had a precedence value and, therefore, has a binding effect, he said, recalling that the judgement was titled Federation of Pakistan versus Muhammad Akram Sheikh.

Then during the hearing of the review petition, a question was raised through an application by the federal government stating that some of the judges who decided a case in the earlier round of litigation be declared as judges in their own cause having a pecuniary interest.

But Justice Sheikh, while referring to the allegation of bias, had held that it was for the judges concerned and not the rest of the judges of the bench to decide in their judicious sagacity and wisdom whether they may participate in the proceedings in question or not.

Meanwhile, Munir Kakar said in the statement that after quashing the presidential reference against Justice Isa, no dispute existed between the government and the judge.

He said the SC order was reminiscent of the 1990s era when one bench of the superior court used to issue orders against other benches, adding that the legal fraternity would never compromise on their efforts to ensure independence of the judiciary.

They demanded that the curb placed on Justice Isa be removed immediately.