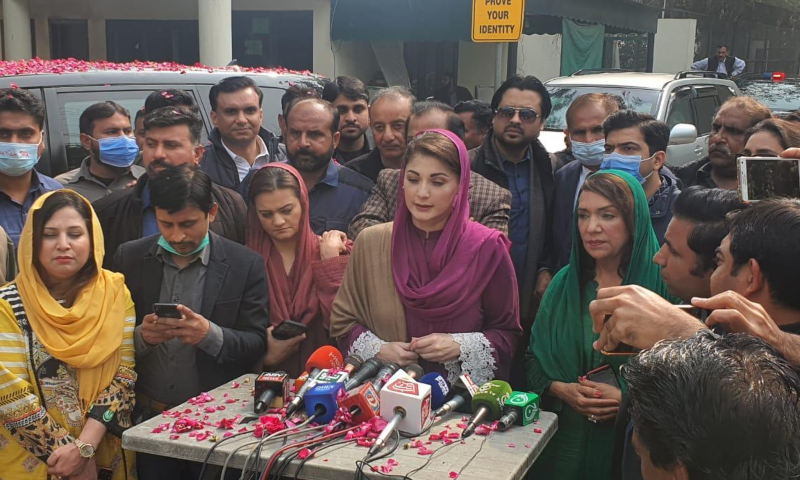 PML-N Vice President Maryam Nawaz on Saturday said the written order by the chief justice of Pakistan in which he said Supreme Court Justice Qazi Faez Isa should not hear cases involving Prime Minister Imran Khan "is not good for the credibility and respect of the judiciary".

"The whole system of justice and the respect of the judiciary is being risked to save an unqualified and incompetent person."

Interacting with reporters before her departure from Jati Umra to Sialkot, where she will address a rally in Daska as part of the election campaign for NA-75, Maryam was asked about Thursday's written order by the chief justice of Pakistan.

Responding to the question, Maryam said the development was completely different than the treatment meted out to her father, PML-N supremo Nawaz Sharif.

"People can see the faces, the decisions and the differences between the remarks," she said.

"I understand that there have been historic attempts to break [the] PML-N [...] the state and all institutions have been thrust against a party but [...] the PML-N did not break apart," Maryam said, adding that the reason behind this was the PML-N becoming an "ideological party".

"Every coming day is proving that Mian [Nawaz Sharif] sahab's vision was right."

Responding to another question, Maryam said Major General Babar Iftikhar, the director-general of Pakistan Army's media wing, was "very respectable for me [...] and he is a good man". "However, when you say such things then they will become a subject of mockery among the nation."

She was referring to his comments on Monday when he rubbished rumours that the armed forces and the opposition alliance, Pakistan Democratic Movement (PDM), were in contact through "backdoor channels" and said that the army should not be dragged into politics. "I would again request please don't drag the institution into this dialogue," he had said.

Maryam said a number of recent developments "were in front of the world [to see] so please speak that which the world will accept". Otherwise, she said, it would not be good for his credibility and that of the institution he represents.

"The people will think you are lying [...] it is better that you adopt silence and don't talk on the issue but don't give wrong statements."

She also reiterated that both the PDM and the PML-N wanted electoral reforms and real democracy but any legislation on this front could not be be done with PM Imran at the helm.