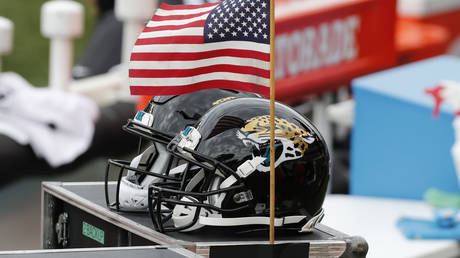 Bosses at NFL side the Jacksonville Jaguars have been slammed by fans after Chris Doyle, a coach who they said had been "vetted" in a "very good" hiring process, resigned a day after diversity campaigners savaged his appointment.

Strength coach Doyle received a $1.1 millon payment agreement after resigning from Iowa in June, leaving after more than 12 former players claimed he had bullied and discriminated against them in accusations that he denied.

Doyle had been a strength coach at Iowa for 20 years, and Jaguars coach Urban Meyer said he felt "great" about Doyle's "expertise" when he appointed the man he had known for decades, adding: "We did a very good job vetting that one.”

“I vet everyone on our staff," Meyer explained. "The relationship goes back close to 20 years and a lot of hard questions [are] asked, a lot of vetting [is] involved with all our staff.

▪️ Served as Head Strength and Conditioning Coach for the University of Iowa from 1999-2019
▪️ Participated in 16 bowl games
▪️ Saw 55 Iowa players selected in the NFL Draft from 2005-2019 pic.twitter.com/CgHotjGgDK

“I've known the person for close to 20 years and I can assure [the owners] there will be nothing [untoward] of any sort in the Jaguar facility."

The Fritz Pollard Alliance, which exists to increase diversity in the NFL, insisted that the racist allegations at Iowa should have ended Doyle's prospects of being hired.

"At a time when the NFL has failed to solve its problem with racial hiring practices, it is simply unacceptable to welcome Chris Doyle into the ranks of NFL coaches," it said in a statement.

Here is a picture of Urban Meyer coaching in the NFL. pic.twitter.com/7fprYM8JH6

"Doyle's departure from the University of Iowa reflected a tenure riddled with poor judgment and mistreatment of black players. His conduct should be as disqualifying for the NFL as it was for University of Iowa.

"Urban Meyers' statement, 'I've known Chris for close to 20 years,' reflects the 'good old boy' network that is precisely the reason there is such a disparity in employment opportunities for black coaches."

Meyer and the Jaguars received mockery and derision after being forced to make an abrupt about-turn.

Saw that one coming after all the backlash !

We all did, Urban Meyer especially should've known this was going to happen

"Cancel culture wins again, thankfully," said one, while another responded: "Saw that one coming after all the backlash."

Others argued over whether Doyle should ever be given another coaching opportunity. "Second chances aren’t allowed in this world we live in," replied one, causing a Doyle critic to retort: "This guy has been given like 20 chances. The complaints on him are a mile long."

Another said: "I don’t agree with a lot of the things the man did in his past but the media driving this narrative non-stop, controlling his life beyond belief is unacceptable.

I don’t agree with a lot of the things the man did in his past but the media driving this narrative nonstop, controlling his life beyond belief is unacceptable. Sure, his experiences and choices were absolutely unacceptable but no need to ruin his life for every opportunity.

This guy has been given like 20 chances. The complaints on him are a mile long.

If making terrible choices shouldn't ruin someone's life, what should??

"Sure, his experiences and choices were absolutely unacceptable but no need to ruin his life for every opportunity."

Revealing the rapid departure, Meyer announced: "Chris (Doyle) did not want to be a distraction to what we are building in Jacksonville.

"We are responsible for all aspects of our programme and, in retrospect, should have given greater consideration to how his appointment may have affected all involved. We wish him the best as he moves forward in his career."

David Brooks and the Endless Grift of the Conservative Commentariat