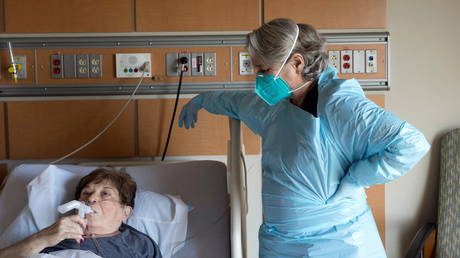 Victoria’s top quarantine official asked that compassion be shown to the corona-infected asthmatic believed to be the source of an outbreak at a Holiday Inn hotel that prompted a strict five-day lockdown in the Australian state.

“No one ever wanted this to happen and I am sorry that this has been played out the way it has,” Emma Cassar, the commissioner of Covid-19 Quarantine Victoria (CQV) said on Saturday. “It is awful. We have never accused him of doing the wrong thing, he hasn’t done the wrong thing.”

She was referring to a 38-year-old man from Victoria who was being widely blamed for an outbreak of the highly contagious ‘British’ strain of Covid-19 last week. State authorities announced a surprise tier-four ‘circuit-breaker’ lockdown on Friday in an attempt to prevent the virus from circulating among the general public. The five-day stay-at-home order was met with complaints from anti-lockdown activists and triggered panic buying of essential goods like toilet paper.

The man, who is currently being cared-for at an intensive care unit, said he was vilified for inadvertently causing the outbreak during his quarantine at the Holiday Inn near Melbourne Airport after returning from Europe. The spread of the virus was blamed on a nebulizer, a medical device that breaks a medicine into fine mist that can be inhaled by a patient and which he’d used to treat his asthma.

“If I was told that I couldn’t use it, I never would have used it,” he told The Age. “The way it has all come out in the news and through the government has made it sound like I was using it illegally or that I have snuck it in or something like that. It’s been very distressing.

You are left feeling like a criminal or that you’ve done the wrong thing. That has been the hardest thing in all this.

The man used the device twice, unaware that, by the time he was infectious, the nebulizer was spreading the virus throughout the hotel. As of Saturday, 14 people, including hotel workers and their direct contacts, have tested positive for Covid-19. Almost a 1,000 people are being monitored due to their possible exposure, with tests expected to come through by Monday.

There are conflicting claims about why the threat posed by nebulizers was not taken into account by the man, whose identity was not made public. He insisted he had informed the hotel staff that he was in possession of the device and wasn’t told not to use it. This happened both at the airport Holiday Inn and at a hotel in Flinders Lane, where he and his family were moved after testing positive for Covid-19, according to the interview.

At the latter facility he said he was told he could still use the nebulizer, provided he gave a heads-up so that hotel employees could keep away from the rooms for some time after. Four hours later, that permission was revoked after a consultation with health experts and the man was advised to use an asthma spacer instead.

The CQV chief said there were no records of the man declaring the nebulizer, but added that the man was “not lying.” She encouraged “media outlets to be respectful, to be kind” when covering the story.

Victoria Premier Daniel Andrews said his government “clearly communicated” that people should not use such vaporizing medical equipment during a quarantine as he was announcing the lockdown.

“Those machines are not allowed, that was clearly communicated, but if you are inviting me to have a crack at a bloke who is on a machine to breathe at the moment in an ICU, I’m just not doing that,” he said.

“The biggest surprise of the whole thing is when the news is saying ‘you should have known’, but these people should have told me,” the asthmatic man said. “It is not my responsibility to know that. It’s their responsibility because I am in their care health-wise, and they should have understood that they have to tell me something like that.”

Golden Globes TV Predictions: Who Will Win After an Unprecedented Awards Race?