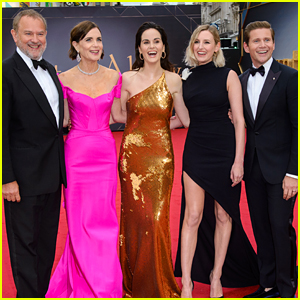 The 57-year-old actor, who famously played Lord Crawley in both the Masterpiece series and in the first movie, opened up about the status of the second movie.

“Here’s the deal, if everybody who is offered a vaccine takes a vaccine, we can make a movie, we will make a movie,” Hugh shared while on BBC Radio 2’s The Zoe Ball Breakfast Show this week.

He continued, “It’s the usual thing. The planets are circling. They are beginning to get into alignment. There is a thing called coronavirus knocking around and until that is under control in a sensible way, we are not going to be able to get all those ducks in a row…”

Hugh adds that he has seen a script and there is “certainly the intention to do it. We would love to do it, we are desperate to do it.”

“I think it’s the sort of pleasurable release of a movie like the first one was, that audiences would enjoy after all of this mess we have been through.”

The 2019 Downton Abbey movie centered back on the Crawleys as they prepared for the most important moment of their lives: A royal visit from the king and queen of England.

Just this week, it was revealed that Hugh was playing a big part in the fight against coronavirus.

As rent comes due, millions of Americans are already thousands behind