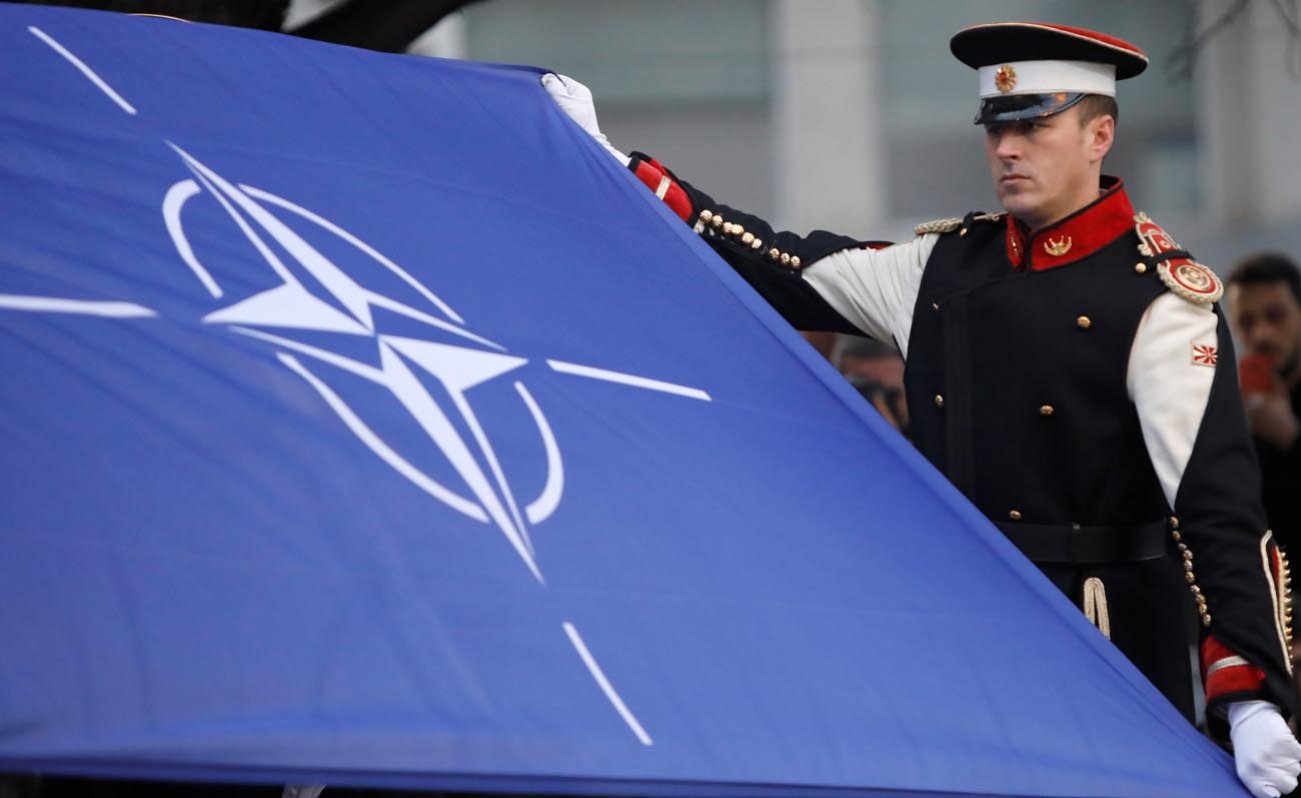 A Russia-Nato war would not yield a definitive winner.

Here's What You Need to Remember: The actual NATO troop presence in Eastern Europe is something that is still under consideration and subject to change in this new administration. For quite some time, NATO and the US have been considering adding more troops to the Eastern flank as a way to further deter Russia.

Current tensions between Russia and NATO are leading many to carefully assess this question and examine the current state of weaponry and technological sophistication of the Russian military -- with a mind to better understanding the extent of the kinds of threats they may pose.

Naturally, Russia’s military maneuvers and annexation of the Crimean peninsula have many Pentagon analysts likely wondering about and assessing the pace of Russia's current military modernization and the relative condition of the former Cold War military giant’s forces, platforms and weaponry.

Russia has clearly postured itself in response to NATO as though it can counter-balance or deter the alliance, however some examinations of Russia’s current military reveals questions about its current ability to pose a real challenge to NATO in a prolonged, all-out military engagement.

Nevertheless, Russia continues to make military advances and many Pentagon experts and analysts have expressed concern about NATO's force posture in Eastern Europe regarding whether it is significant enough to deter Russia from a possible invasion of Eastern Europe.

Also, Russia’s economic pressures have not slowed the countries’ commitment to rapid military modernization and the increase of defense budgets, despite the fact that the country’s military is a fraction of what it was during the height of the Cold War in the 1980s.

While the former Cold War giant’s territories and outer most borders are sizeably less than they were in the 1980s, Russia’s conventional land, air and sea forces are trying to expand quickly, transition into the higher-tech information age and steadily pursue next generation platforms.

Russia’s conventional and nuclear arsenal is a small piece of what it was during the Cold War, yet the country is pursuing a new class of air-independent submarines, a T-50 stealth fighter jet, next-generation missiles and high-tech gear for individual ground soldiers.

The National Interest has recently published a number of reports about the technological progress now being made by Russian military developers.  The various write-ups include reporting on new Russian anti-satellite weapons, T-14 Armata tanks, air defenses and early plans for a hypersonic, 6th-generation fighter jet, among other things. Russia is unambiguously emphasizing military modernization and making substantial progress, the reports from The National Interest and other outlets indicate.

For instance, Russia has apparently conducted a successful test launch of its Nudol direct ascent anti-satellite missile, according to The National Interest.

"This is the second test of the new weapon, which is capable of destroying satellites in space. The weapon was apparently launched from the Plesetsk test launch facility north of Moscow," the report from The National Interest writes.

In addition, The National Interests' Dave Majumdar reported that Russian Airborne Forces plan six armored companies equipped with newly modified T-72B3M  tanks. Over the next two years, those six companies will be expanded to battalion strength, the report states.

.During the Cold War, the Russian defense budget amounted to nearly half of the country’s overall expenditures.

Overall, the Russian conventional military during the Cold War – in terms of sheer size – was likely five times what it is today.

The Russian military had roughly 766,000 active front line personnel in 2013 and as many as 2.4 million reserve forces, according to globalfirepower.com. During the Cold War, the Russian Army had as many as three to four million members.

By the same 2013 assessment, the Russian military is listed as having more than 3,000 aircraft and 973 helicopters. On the ground, Globalfirepower.com says Russia has 15-thousand tanks, 27,000 armored fighting vehicles and nearly 6,000 self-propelled guns for artillery. While the Russian military may not have a conventional force the sheer size of its Cold War force, they have made efforts to both modernized and maintain portions of their mechanized weaponry and platforms. The Russian T-72 tank, for example, has been upgraded numerous times since its initial construction in the 1970s.

On the overall Naval front, Globalfirepower.com assesses the Russian Navy as having 352 ships, including one aircraft carrier, 13 destroyers and 63 submarines. The Black Sea is a strategically significant area for Russia in terms of economic and geopolitical considerations as it helps ensure access to the Mediterranean.

Analysts have also said that the Russian military made huge amounts of conventional and nuclear weapons in the 80s, ranging from rockets and cruise missiles to very effective air defenses.

In fact, the Russian built S-300 and S-400 anti-aircraft air defenses, if maintained and modernized, are said to be particularly effective, experts have said.

In the air, the Russian have maintained their 1980s built Su-27 fighter jets, which have been postured throughout strategic areas by the Russian military.

Often compared to the U.S. Air Force’s F-15 Eagle fighter, the Su-27 is a maneuverable twin engine fighter built in the 1980s and primarily configured for air superiority missions.

While many experts maintain that NATO’s size, fire-power, air supremacy and technology would ultimately prevail in a substantial engagement with Russia, that does not necessarily negate findings from a Rand study released more than a year ago explaining that NATO would be put in a terrible predicament should Russia invade the Baltic states.

NATO force structure in Eastern Europe in recent years would be unable to withstand a Russian invasion into neighboring Latvia, Lithuania and Estonia, the Rand study has concluded.

After conducting an exhaustive series of wargames wherein “red” (Russian) and “blue” (NATO) forces engaged in a wide range of war scenarios over the Baltic states, a Rand Corporation study called “Reinforcing Deterrence on NATO’s Eastern Flank” determined that a successful NATO defense of the region would require a much larger air-ground force than what is currently deployed.

In particular, the study calls for a NATO strategy similar to the Cold War era’s “AirLand Battle” doctrine from the 1980s.  During this time, the U.S. Army stationed at least several hundred thousand troops in Europe as a strategy to deter a potential Russian invasion. Officials with U.S. Army Europe tell Scout Warrior that there are currenty 30,000 U.S. Army soldiers in Europe.

The Rand study maintains that, without a deterrent the size of at least seven brigades, fires and air support protecting Eastern Europe, that Russia cold overrun the Baltic states as quickly as in 60 hours.

“As currently postured, NATO cannot successfully defend the territory of its most exposed members. Across multiple games using a wide range of expert participants in and out of uniform playing both sides, the longest it has taken Russian forces to reach the outskirts of the Estonian and/or Latvian capitals of Tallinn and Riga, respectively, is 60 hours. Such a rapid defeat would leave NATO with a limited number of options,” the study writes.

“AirLand” Battle was a strategic warfighting concept followed by U.S. and allied forces during the Cold War which, among other things, relied upon precise coordination between a large maneuvering mechanized ground force and attack aircraft overhead.  As part of the approach, air attacks would seek to weaken enemy assets supporting front line enemy troops by bombing supply elements in the rear. As part of the air-ground integration, large conventional ground forces could then more easily advance through defended enemy front line areas.

A rapid assault on the Baltic region would leave NATO with few attractive options, including a massive risky counterattack, threatening a nuclear weapons option or simply allowing the Russian to annex the countries.

One of the limited options cited in the study could include taking huge amounts of time to mobilize and deploy a massive counterattack force which would likely result in a drawn-out, deadly battle. Another possibility would be to threaten a nuclear option, a scenario which seems unlikely if not completely unrealistic in light of the U.S. strategy to decrease nuclear arsenals and discourage the prospect of using nuclear weapons, the study finds.

A third and final option, the report mentions, would simply be to concede the Baltic states and immerse the alliance into a much more intense Cold War posture. Such an option would naturally not be welcomed by many of the residents of these states and would, without question, leave the NATO alliance weakened if not partially fractured.

The study spells out exactly what its wargames determined would be necessary as a credible, effective deterrent.

“Gaming indicates that a force of about seven brigades, including three heavy armored brigades—adequately supported by airpower, land-based fires, and other enablers on the ground and ready to fight at the onset of hostilities—could suffice to prevent the rapid overrun of the Baltic states,” the study writes.

During the various scenarios explored for the wargame, its participants concluded that NATO resistance would be overrun quickly in the absence of a larger mechanized defensive force posture.

“The absence of short-range air defenses in the U.S. units, and the minimal defenses in the other NATO units, meant that many of these attacks encountered resistance only from NATO combat air patrols, which were overwhelmed by sheer numbers. The result was heavy losses to several Blue (NATO) battalions and the disruption of the counterattack,” the study states.

Latvia, Lithuania and Estonia could be likely Russian targets because all three countries are in close proximity to Russia and spent many years as part of the former Soviet Union, the study maintains.

“Also like Ukraine, Estonia and Latvia are home to sizable ethnic Russian populations that have been at best unevenly integrated into the two countries’ post-independence political and social mainstreams and that give Russia a self-justification for meddling in Estonian and Latvian affairs,” the study explains.

The Rand study maintained that, while expensive, adding brigades would be a worthy effort for NATO.

Buying three brand-new ABCTs and adding them to the U.S. Army would not be inexpensive—the up-front costs for all the equipment for the brigades and associated artillery, air defense, and other enabling units runs on the order of $13 billion. However, much of that gear—especially the expensive Abrams tanks and Bradley fighting vehicles—already exists,” the study says.

The actual NATO troop presence in Eastern Europe is something that is still under consideration and subject to change in this new administration. For quite some time, NATO and the US have been considering adding more troops to the Eastern flank as a way to further deter Russia.

The Pentagon’s European Reassurance Initiative, introduced last year, calls for additional funds, forces and force rotations through Europe in coming years, it is unclear what the force posture will ultimately be.

At the same time, the Pentagon’s $3.4 Billion ERI request does call for an increased force presence in Europe as well as “fires,” “pre-positioned stocks” and “headquarters” support for NATO forces.

Officials with U.S. Army Europe tell Scout Warrior that more solidarity exercises with NATO allies in Europe are also on the horizon, and that more manpower could also be on the way.

For example, NATO conducted Swift Response 16 from May 27 through June 26 of last year in Poland and Germany; it included more than 5,000 soldiers and airmen from the United States, Belgium, France, Germany, Great Britain, Italy, the Netherlands, Poland, Portugal and Spain.

This first appeared in Scout Warrior here and is being republished due to reader interest.