On Friday, acting Mets general manager Zack Scott spoke to a pool of beat reporters from Port St. Lucie. The questions ranged from pitching, to the current and future roster, the franchise’s feeling regarding third base, his new role as general manager, and the contract status of Francisco Lindor and Michael Conforto, to name a few.

Scott speaks somewhat nervously, answering questions in short spurts, rarely elaborating on the topic at hand. He did speak with a twinge of levity as he reminded us of the times we live in. Due to the pandemic, Scott has yet to meet Sandy Alderson or Steve Cohen in person. That should be remedied soon as Scott arrived in Port St. Lucie late Thursday and will await the arrival of the rest of the Mets hierarchy.

Here are five things we learned from the presser:

Mets are “Comfortable” with J.D. Davis

“We really like J.D. Davis,” Scott said when asked about third base. He added, “He (Davis) can hit,” “he’s very valuable” and that they have long term control over him. Although he added that the Mets are always looking to improve their roster, third base was not singled out for any pressing need the Mets have right now. 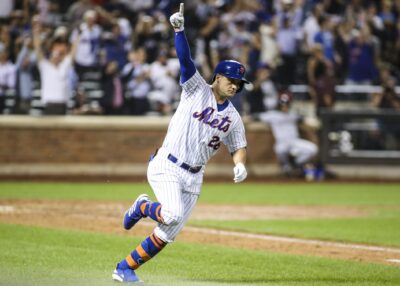 At the conclusion of his response Scott said, “We’re fully comfortable going into the season with J.D. Davis playing an important role.”

Davis will be starting his third season as a Met. He has seen action at third and in left field, but is primarily an infielder. In his first full season in New York, he hit .307 with 22 home runs. Davis, 27,  is one of the better Mets hitters and can be seen as a better alternative than a player like Justin Turner, 36, who may ask for a three or four-year deal.

It seems like third base is Davis’ to lose.

“Never can have too much pitching”

A cliche? Sure. But it’s been true since the first hurler took the mound in a professional game in 1869. Scott was more focused on depth as he pondered the question and realizes injuries are part of the game. He is happy with the starters the Mets have now, but he will still look to add more, whether it be a top starter or a bottom of the rotation type guy. It is likely the Mets will add a starting pitcher before long as Scott mentioned later in the presser. 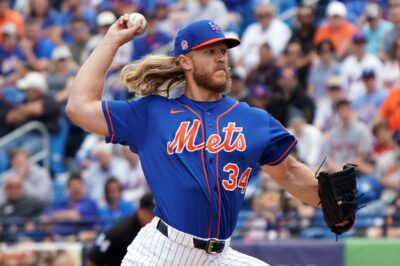 With regard to Noah Syndergaard, the timetable is still for a June return. Scott will talk to the training staff on the weekend but doesn’t expect a change in his return.

The Current Roster and Off-Season Moves

Here, Scott was his most poignant. Making an emphatic point he noted, “We’re not done. We want to do some other things.” When pressed on specifics, he gave none, but later did reference starting pitching as a definite need. The off-season has been good for the Mets and although the new management is not taking bows, the feeling around baseball is that the Mets have greatly improved.

Here Scott was at his most elusive, giving a brief answer to a pressing need. He said that talks to extend Francisco Lindor and Michael Conforto are best done at spring training, although internal talks within the organization have already occurred. He noted that both Sandy Alderson and he did not bring Lindor to the Mets to have him stay just one year, and that adding him would create better depth and quality to the 2021 roster.

Scott then changed the subject abruptly saying his main focus was on building an overall better team. The inference is of course that Conforto and Lindor make the Mets better, but it was a topic the acting GM was clearly uncomfortable addressing. The wish here was he could have a little bit more forthcoming on this matter.

Finally, Scott was asked about his new role as acting general manager and how his day-to-day activities have changed. Scott noted, “I was primarily brought in to oversee research & development and player development…now it’s obviously a lot broader.” By broader he meant the scope and type of conversations he has on a near daily basis with other teams or agents are more expansive, especially in dealing with potential trades or free agent acquisitions.

Scott has met with many more people in the Mets organization then he would have as assistant GM, looking to change a more “narrow focus” of his initial job to a broader one in his new one.

Not the best of conversationalists, Scott, nevertheless, seems to possess the skill set necessary to be an effective general manager. Only time (and performance) will tell if the word ‘acting’ is removed from his title and he becomes the Mets 15th general manager in franchise history.