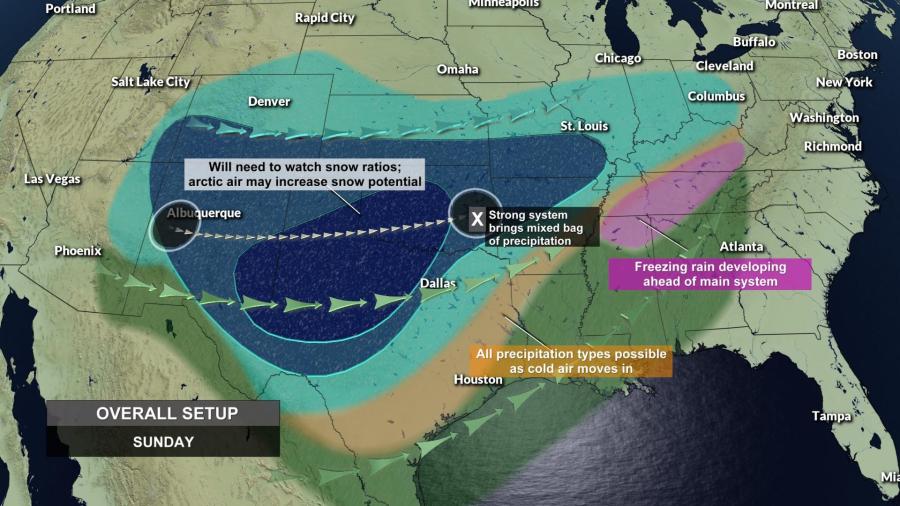 Winter Storm Watch is in effect starting Sunday night and through Tuesday morning currently for our western 2/3 of Central Ohio. This is in effect for moderate to heavy snowfall totals.

It will be a quiet night ahead, and we will take it, we haven't had many of those this month. Temps will be cool dropping to around 20, with wind chills in the lower teens. Saturday will be a chilly and cloudy day with a few snow showers late.

Cooler air will slide in Saturday night, but the coldest air is diving further south across the mid-section of the county. This will allow temps to be chilly on Sunday, but no where near records. We will start in the mid to upper teens on Sunday and climb to the the middle 20s ahead of our next weather maker.

Sunday night we will start to see moisture moving in ahead of the next big weather maker, and this will bring in some light snow showers into our area Sunday night into the overnight hours, with the possibility of some sleet in the east/southeast as lows will fall into the lower to middle teens Monday morning.

Monday is setting up to be a sloppy day as light activity will be around during the morning that will make things slipper to slick, but the bigger system will still be to our southwest and will be moving up into our area. This will increase snowfall mid to late afternoon on Monday and into Monday night.

As the low approaches our area, it does appear that we will have a sharp cut-off across our area, with the line of sleet in our east, and freezing rain possible in our southeast Monday night. The low will be northeast of our area on Tuesday morning, and we will see tapering down flurries during the morning.

By the time the event ends, the heaviest snowfall will be in our northwest counties, and the lowest totals in the southeast part of our area where there is a better chance of a wintry mix. Snowfall numbers are looking to come in around 4-8" with some isolated higher totals northwest, and lower totals southeast. These numbers can, and will likely shift a bit as this system that is still very far away gets closer.

It is very important to note, that a slight shift in the track could make a huge difference in precip. type, and amounts.

We will get a break Tuesday later and through most of Wednesday, before another system follows up right behind for Wednesday night and through Thursday with more additional snow, and potentially another wintry mix in the southeast. Highs will climb near freezing on Thursday, and indication that this system might have a bit more wintry mix contained with it.

Behind the system cooler air will slide in on Friday with flurries ending early, and highs back in the lower 30s, almost a dozen off the normal (in the lower 40s) by late next week.