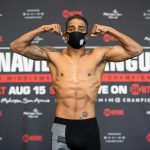 After losing a fight by questionable scoring, lightweight Jackson Mariñez could have taken a stay-busy fight against a journeyman fighter. Instead, he is jumping on an opportunity that could put him in the position to become a legit contender, if he comes out victorious.

The Commey-Mariñez fight was elevated to main event status on the Top Rank card after the vacant WBO light heavyweight title fight between Joe Smith and Maxim Vlasov was cancelled Thursday. Vlasov tested positive for COVID-19 after entering ‘The Bubble.’

Mariñez (19-1, 7 knockouts), who resides in Santo Domingo in the Dominican Republic, last fought on August 15, losing by unanimous decision to Rolando ‘Rolly’ Romero’ in a fight that many thought Mariñez won comfortably. Mariñez performance did not go unnoticed as Top Rank signed him to a three fight promotional deal.

The 30-year-old believes he outboxed and defeated Romero, but took the outcome with a grain of salt.

“It was not the result we wanted,” Mariñez told The Ring over the phone Wednesday afternoon. “I did my work in the ring and it showed. I’m a Christian so I thought maybe God wanted me to go through this. Maybe something better was going to come along after the Romero fight and it did. I’m grateful for this opportunity to fight someone like Commey on a big stage.”

Saturday night marks the epitome of a crossroads clash. The winner could be in line for a world title fight or even the possibility for an elimination bout.

Commey (29-3, 26 KOs), who is originally from Accra, Ghana and now resides in the Bronx, New York, has not fought since December 2019, when he was knocked out by Teofimo Lopez, losing the IBF lightweight title in the process.

Despite Commey having the significant edge in terms of the number of pro fights and the level of opposition each fighter has faced, Mariñez believes fighting someone the likes of Commey is a solid measuring stick.

“I have to be cautious about his power,” said Mariñez, who will be fighting in the United States for the third consecutive time. “He’s solid. He is a great measuring stick. He’s an experienced fighter. I prepared well for this fight. I believe this fight will be a great one for the fans watching on TV.

“I see myself as a contender. Yes, I’m getting a lot of experience facing someone like Commey, but I want to demonstrate what I’m capable of in the ring.

Mariñez has worked with renowned trainer Robert Garcia over the last several months at the Robert Garcia Boxing Academy in Riverside, California.

As have several unbeaten fighters, contenders or prospects, Mariñez has gained a wealth of knowledge from Garcia, Garcia’s father Eduardo, and world titleholders themselves from the likes of Mikey Garcia and WBO/ WBO junior welterweight titleholder Jose Ramirez. Mariñez has found more confidence in his abilities through sparring and the teachings he receives from Garcia.

“I had a great camp with Robert,” said Mariñez, who also work with strength and conditioning coach Nate Arreola. “You train with a world-class trainer. I’ve really bonded and learned from Robert. He talks to you as a friend outside of the ring, but he talks to you as a trainer should when you work the mitts or are sparring. He gives you great advice. So does all the other fighters he trains. You’re surrounded by champions and you spar the likes of (unbeaten welterweight) Vergil Ortiz, Jr., (unbeaten lightweight) Hector Tanajara, and Mikey (Garcia). You want to be like them. You wish to be like them. That gives you added motivation.”

Mariñez is the latest in fighters from the Dominican Republic who hope to find success in the United States. Mariñez has so far made a name for himself, despite the result in the Romero fight.

Mariñez is one of them. He proved to be a superior fighter in the Romero fight, but facing the likes of Commey is a real step-up in opposition and test on Saturday night. Despite the betting odds against him, Mariñez is confident he can get the job done against Commey.

“I think I have the talent to do well as a lightweight contender. I want to demonstrate that against Commey. We have put in the work, now we just have to execute. It will be a tough test, but I have confidence in myself.

Francisco A. Salazar has written for The Ring since October of 2013 and has covered boxing in Southern California and abroad since 2000. Francisco also covers boxing for the Ventura County (Calif.) Star newspaper. He can be reached by email at santio89@yahoo.com or on Twitter at FSalazarBoxing

The post Jackson Mariñez looks to bounce back from dubious loss: ‘I’m ready for Richard Commey’ appeared first on The Ring.

From caravans to fancy hotels, plan a getaway to match the lockdown reopening dates