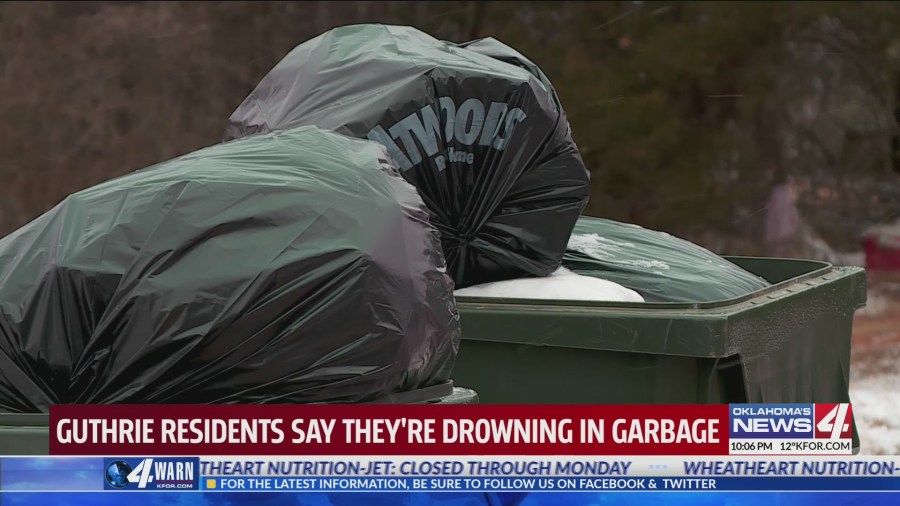 LOGAN COUNTY, Okla. (KFOR) – People in the areas surrounding Guthrie said they are drowning in garbage, their trash going on two weeks or longer without being picked up, and weather will likely extend that even longer.

“It’s all right here. All the bags of trash are right there,” said Chelsea Wallin, pointing at the overflow bags of garbage in her husband's truck because they don’t fit in either of her garbage cans.

‘They can die in these temperatures,’ Warnings for pet owners in freezing conditions

Going into their second week without a pickup, she and her neighbors were left in a holding pattern.

“They said, ‘We don’t know when we’re coming to pick up your trash,’” she said of the person who picked up the phone at Waste Connections of Logan County.

A spokesperson for the waste removal company didn’t want to go on camera, but said that truthfully, it’s not clear when roads outside of cities will be deemed safe enough for the trucks to travel on.

“It’s stressful worrying about other people’s animals, raccoons, possums trying to get in your trash, and having trash everywhere,” Wallin said. “We would like to know when instead of waiting several days without a notice.”

The company does not send out emails or mail announcements, but a spokesperson said the best way to stay on top of any news is to check the Facebook page.

When trucks can hit the county roads again, he said no matter how many bags of overflow there are, they will take care of it.

In the meantime, there was a small dumpster set up at 316 W. Harrison in Guthrie for anyone feeling desperate.

“My husband’s truck, it’ll probably be completely full with bags of trash by the time they come to pick up our cans,” Wallin said.

Young Rangers still learning how to hold a lead