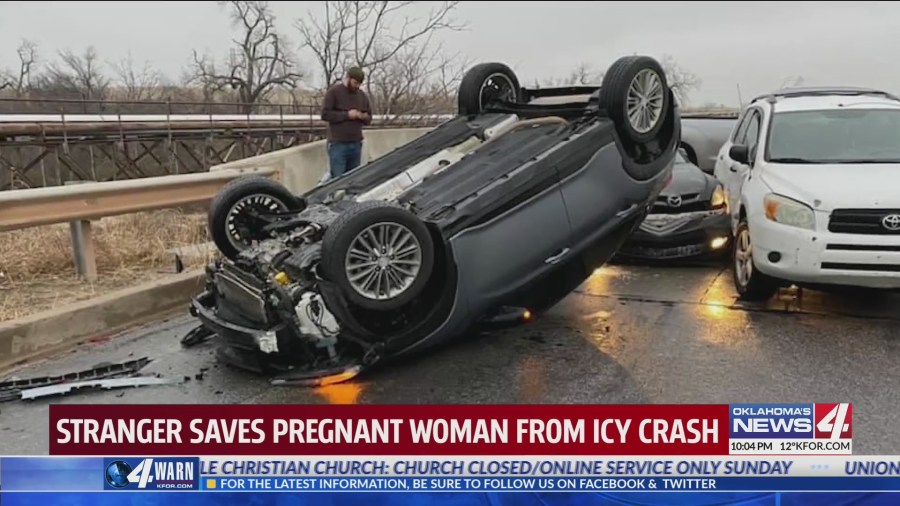 OKLAHOMA CITY (KFOR) – A hero was ready to jump into action when a 20-year-old mom-to-be was stuck upside down in her car after she slid on an Oklahoma City bridge.

Twenty-year-old Kiahnna Smith was on her way to work at around 7 a.m. Monday morning when her car flipped due to icy conditions near Council and Reno.

Smith says a white truck in front of her began sliding and she lost control.

"I remember I was upside down, and I was just crying and wondering what’s wrong with my baby," Smith said. "Like, I was so scared something was wrong.”

The young mom-to-be tells KFOR she was hysterical while caught in the middle of the six-car collision.

Smith says she opened her eyes to a stranger at her passenger side. Brian Malatka immediately helped her crawl out. Malatka, a father of three himself, rushed her to safety just in time, as four other cars slid into Smith's car.

“I found out she was 20 years old and eight months pregnant," Malatka said. "I just got attached. By the Grace of God she was out of that area."

Brian tells KFOR he doesn't call himself a hero.

"If that was my daughter or my kid or anybody, I would want someone to help," Malatka said.

However, Kiahnna says she is forever thankful Brian saved two lives that day.

"If there weren’t people like him, I don't know what I would've done," Smith said.

Smith says her boyfriend rushed to the scene to take her to the hospital. Thankfully, doctors said she and her baby are 100 percent healthy. Smith is now recovering at home. Her baby girl's due date is set for April 1.

This longtime Trump associate holds the key to pursuing criminal charges against him: NYT's Haberman

A multi-layered dance for the 21st century