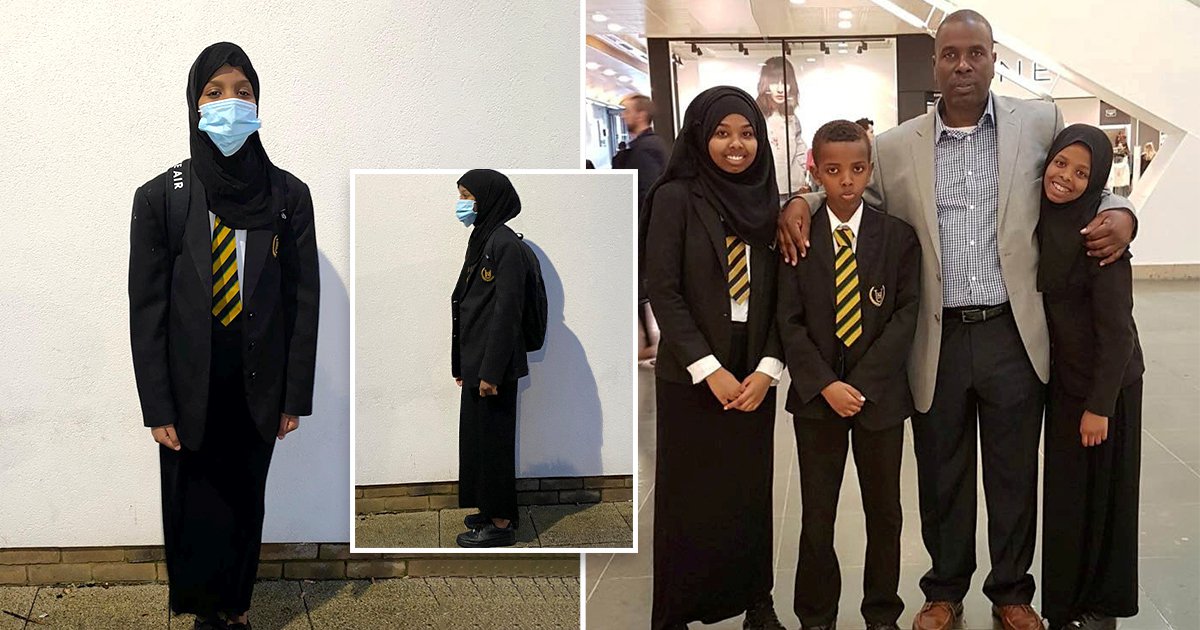 A Muslim schoolgirl’s parents have been threatened with court action for refusing to send her to school in a shorter skirt.

Siham Hamud, 12, had been wearing an ankle-length skirt to school for years, but was allegedly told the school uniform was incorrect last month.

Her father Idris, 55, said Siham was sent home from school to change every day in December, and told to return wearing the correct uniform – but she refused.

Uxbridge High School says girls should wear black trousers or a black pleated skirt from official uniform suppliers, which the family says falls above the knee.

But dad-of-eight Idris claims both uniform choices go against their religious beliefs.

Siham, who is currently studying from home due to lockdown restrictions, said: ‘It feels like bullying because of what I believe.

‘I think they should just let me wear my school uniform to school. I like school normally, and English, drama and RE are my favourite lessons but I couldn’t attend.

‘I find it annoying because I’ve missed a month of school, so I have to catch up a lot. I wish I could just have gone to school as normal.

‘It makes me feel left out, because I can’t see my friends either. They aren’t accepting me for my religion and that’s wrong.

Idris, an athletics coach, added: ‘My daughter is being denied an education because of her religious beliefs.

‘All Siham wants to do is to wear a skirt which is a few centimetres longer than her classmates, and I don’t know why the school has such a problem with this.

‘She is sent home to change into a shorter skirt then return to school later that day, but she isn’t going to change her beliefs in an hour.

‘The school is threatening to take legal action against me, but I’m not forcing her to wear a longer skirt – it’s her faith and her decision to make.’

The family said they recently discovered a new school uniform rule about skirts was introduced two years ago, stating shorter school-branded skirts had to be worn.

But the family claim they didn’t know, and Siham continued wearing her longer skirt, unaware until she was pulled up on December 1.

She was sent home to change but didn’t return, and the same thing happened each day for the three weeks of term in December, her family said.

In a letter threatening legal action, the school wrote: ‘Siham’s absence is being recorded as unauthorised. Unauthorised absence may result in a fine being issued, or legal action being taken against the adults who have parental responsibility or day-to-day care of your child.

‘Legal action can be in the form of a penalty notice or a summons to the magistrates’ court.

‘I must ask that you support the school and your daughter by ensuring that she attends school in full school uniform with immediate effect.’

While Siham has been learning from home since the new term began, Idris expects the issue to return once face-to-face teaching resumes.

The school’s principal, Nigel Clemens, said: ‘This matter is currently subject to examination through the formal school complaints policy. It would therefore not be appropriate to comment further at this time.’