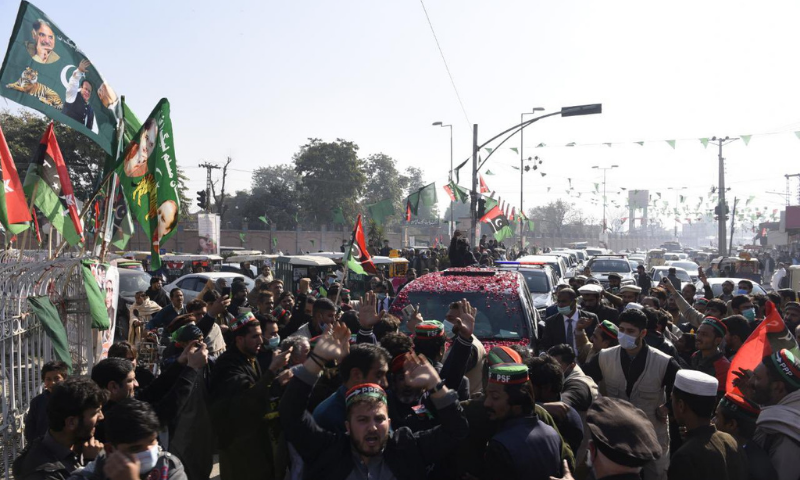 PPP Chairperson Bilawal Bhutto-Zardari arrived in Malakand in Khyber Pakhtunkhwa on Monday for the latest rally of the Pakistan Democratic Movement (PDM).

Before leaving for Malakand district, Bilawal asked people to join in the "march against inflation, corruption and injustices of 7 years of incompetent, illegitimate and puppet rule of PTI which has pushed KP & now all of Pakistan into crisis".

The PPP chairperson is accompanied by former prime ministers Yousuf Raza Gilani and Raja Pervez Ashraf, according to the party's media cell. Other party leaders, including Farhatullah Babar, Nayyar Bokhari and Sherry Rehman are also part of the entourage.

Along the way, Bilawal first addressed workers at Sakha Kot and then at Dargai Pathak.

Meanwhile, preparations for the rally at Malakand's Batt Khela bazaar have been completed. PPP leader Faisal Karim Kundi said the venue for the rally, hosted by the PPP, was changed "at the last minute due to security reasons".

The rally was originally scheduled to be held at the Zafar Park in Malakand.

Jamiat Ulema-i-Islam-Fazl (JUI-F) President Maulana Fazlur Rehman, who is also on his way to the rally, will reach the venue through the Swat Expressway.

Last week, the PDM had held a rally in KP's Bannu. However, Bilawal and PML-N Vice President Maryam Nawaz did not attend that rally.

During the Bannu gathering, Maulana Fazl had lashed out at the PTI government over recent terrorism incidents in the country, including the brutal massacre of the 11 Shia Hazara miners in Balochistan, saying that the incidents showed that the government's claims of having established peace were "wrong".

In his speech, Rehman accused the government of having "ruined" peace and the country's economy, and claimed that there was no system in the tribal areas.

The PDM has demanded the PTI-led government quit by January 31 or face an intensified opposition movement, including a long march to the capital.