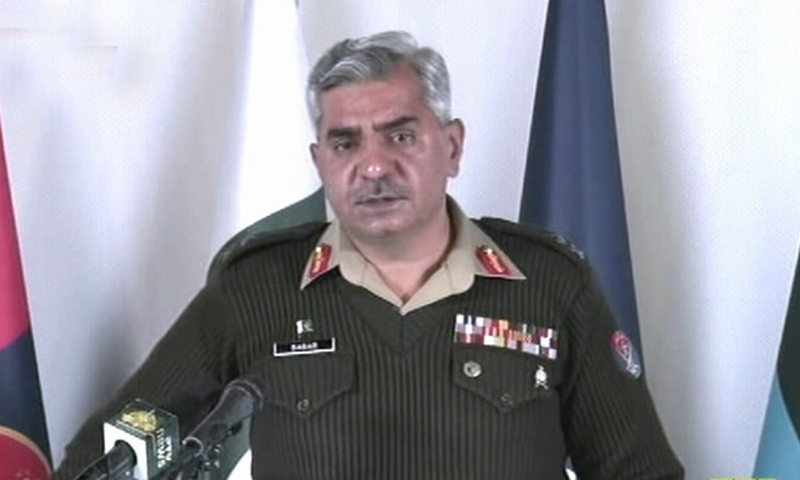 Leaders of the opposition Pakistan Democratic Movement (PDM) will be offered tea and snacks and looked after if they decide to stage a long march towards Rawalpindi, the chief of the military's media wing said on Monday.

Maj Gen Babar Iftikhar, director general of the Inter-Services Public Relations (ISPR), was answering a question at a press conference about PDM president Maulana Fazlur Rehman's indication that the opposition could turn the direction of its anti-government movement towards the army leadership.

"I don't see a reason for [them] coming to Pindi. And if at all they want to come, we will offer them refreshments (chai pani) and look after them. What more can I say?" the DG ISPR said.

Rehman, while talking to the media after a PDM meeting earlier this month, had said the 11-party opposition alliance's movement would no longer be directed only at the Prime Minister Imran Khan-led government but also "his backers", hinting that its possible long march to the capital "could also be to Rawalpindi".

The PDM chief had said if the PTI government refused to resign by January 31, the PDM leadership will announce the long march to Islamabad and decide its date. "It will also decide whether the long march should be staged towards Islamabad or to Rawalpindi," Rehman had added. Rawalpindi is a metonym for the headquarters of the Pakistan Army.

Maj Gen Iftikhar was also asked by a reporter whether any "stern action" would be taken against those propagating an "anti-army narrative" — an apparent reference to some PDM leaders.

The ISPR chief responded: "When it comes to criticism or allegations levelled, the army is doing its job. As to why are we not responding to that, only such allegations are responded to which have some weight or are based on facts.

"We have our hands full and we neither want to get involved in such things nor will we. We have stayed the course [and] we will stay the course. There is nothing to worry about; we are not worried."

He said the morale of the entire army and that of the families of the martyrs was very high.

The opposition alliance and particularly PML-N supremo and former prime minister Nawaz Sharif have in recent months accused the army leadership of meddling in the country's politics and bringing Imran Khan into power by manipulating the 2018 general elections.

While answering another question about the PDM's allegations against the army, Maj Gen Iftikhar denied the impression that there was "no concern" within the army over the statements, but emphasised that the armed forces' morale remained high.

"The army is doing its job despite whatever is being said. [But] the concern remains in its place," he said.

In a reference to PDM's statements, the DG ISPR said "the type of allegations that are being levelled have no weight", and cited the allegation about the 2018 elections not being fair.

"The incumbent government asked the Pak Army to conduct elections and the Army conducted them with full responsibility and integrity.

"After that, if anyone has any problem regarding that, then all Pakistani institutions are working and they are the ones who have to decide on that and they should be approached," he added.

Referring to rising political tensions in the country, Maj Gen Iftikhar said: "This is truly not a good thing [...] but all said and done, the army is a subordinate institution of the government."

He added that "whatever has been said, I think the government has given a very good response and is tackling it. Army neither has the need to interfere in political matters nor should attempts be made to drag it in."

Asked about Prime Minister Imran's statement that the opposition was asking the army to overthrow his government, the DG ISPR declined to comment. But he said there was "absolutely no" backdoor contact between the army and the opposition. "There is no such thing. We want to stay out of it and we are out of it," he added.

'No organised terrorist infrastructure in Pakistan'

At the beginning of the briefing, Maj Gen Iftikhar said he had convened the press conference to shed light on the country's security and border situation and to present a comparative analysis of security challenges of the past decade.

"The last 10 years were a challenging time in every aspect for Pakistan," he said at the start of his presser, adding that in 2020 alone, the coronavirus pandemic and locust attacks put Pakistan's food security and economy in danger.

On the other hand, he said, proscribed organisations were being facilitated to harm Pakistan on the western border.

"Despite all these challenges, the state, institutions, the armed forces and intelligence agencies and most importantly the Pakistani people unitedly faced these challenges," Maj Gen Iftikhar said, adding that along with restoring peace in the tribal districts along the western border, socioeconomic projects had been launched.

Concrete steps were taken to solidify the Pak-Afghan and Pak-Iran borders and "as a result of successful operations against terrorism, the security situation improved considerably," he noted.

"Whether it was India's designs or hybrid warfare, whether the challenges were internal or external, we not only showed and identified [them] but also combatted them successfully and the world is recognising it too because the truth always prevails."

Listing some of the measures taken in the security domain, Maj Gen Iftikhar said Operation Raddul Fasad had "consolidated the achievements of the entire decade".

"Through this operation, the support base, facilitators, abettors, financiers [of terrorism] and weapons were destroyed to a large extent. Thankfully, today in Pakistan there is no organised terrorist infrastructure like in the past," he added.

Under the operation, he said, 371,000 intelligence-based actions were conducted in the last three years alone. "If we evaluate the manifestation of success, in 2007-08, only 37 per cent of the areas in the tribal areas were under state control. Today, they have all become part of Khyber Pakhtunkhwa," he added.

The ISPR chief said there had been a 35pc reduction in major terrorism incidents in 2020 compared to 2019, while terror incidents which had hit an annual peak of 90 in the year 2013 had now fallen to around 30.

Correspondingly, there were a total of 414 casualties in 2013 which declined to 98 in 2020. Suicide bombings have also seen a 57pc decrease.

Meanwhile, law-enforcement agencies averted more than 50pc of the terror threats over the course of the last year, Maj Gen Iftikhar revealed. He said terrorism in Karachi had reduced by 95pc, target killings by 98pc, kidnappings for ransom 98pc and extortion 99pc.

Talking about the security dividends of military operations, Maj Gen Iftikhar said development work was ongoing in both KP and Balochistan.

"For the last few months, anti-state elements have been on the verge of destroying the peace in Balochistan. Therefore, security agencies are busy day and night to make this a failure; we are going towards 'build and transfer' from 'clear and hold'," he said, adding that 199 development projects worth Rs6.1 billion had been started in Balochistan, while 815 projects had been commenced in KP's tribal districts.

"All these projects are due to the security dividend for which we have offered sacrifices in the last two decades," the ISPR chief said.

He said after clearing the erstwhile FATA, the security forces were now focused on Balochistan, adding that two Frontier Corps quarters were looking after the province now, instead of one in the past, while a special security division had been raised for the China-Pakistan Economic Corridor which was also looking after coastline security.

In addition, the formations that were present in Quetta have moved to Balochistan's hinterland and are conducting intelligence-based operations.

Answering a question about the presence of the militant Islamic State (IS) group in Pakistan, which claimed last week's killing of 11 Shia Hazara coal miners in the Mach area, the DG ISPR said Pakistan had stated that India was supporting IS's Daesh-e-Pakistan wing in the dossier it unveiled alleging Indian sponsorship of terrorism in the country.

Detailing the security situation along the western frontier, the DG ISPR said the introduction of border terminals, scanners, biometric system, border posts and fencing had helped maintain peace in the area.

He said 83pc work on the 2,611-kilometre Pak-Afghan border fence had been completed, while the remaining work will be completed by the end of the year. Meanwhile, more than 37pc work has been completed on fencing the Pak-Iran border.

According to Maj Gen Iftikhar, 482 out of 1,068 planned forts have been constructed along the borders. He said as a result of border control measures, movement through border terminals had increased 33pc due to fencing.

Briefing journalists about the situation along the eastern border, the DG ISPR said there had been an increase in ceasefire violations by Indian troops, who had "especially targeted" the civilian areas near the Line of Control including women, children and the elderly.

"From 2014 and 2020, there has been a manifold increase in CFVs. Most CFVs took place in 2019 whereas most civilian casualties occurred in 2018," he said, adding that the Pakistan Army had always given a fitting reply to India.

Besides the CFVs, India took the support of fifth-generation warfare. "Recently, as a result of the EU DisinfoLab report, irrefutable evidence is coming forward," the ISPR chief said.

He said while Pakistan was eliminating terrorist organisations and terrorists and fighting disinformation during the last 10 years, India had increased CFVs and was carrying out the worst human rights violations in occupied Kashmir. "In February 2019, it made an unsuccessful attempt at aggression against Pakistan, the proof of which international organisations have placed in front of the world," the ISPR chief added.

Citing the findings of the EU DisinfoLab report, he said India was using fake NGOs and INGOs to propagate anti-Pakistan narrative globally.

He added about the damage caused to the Kashmir cause by the disinformation: "On one hand Indian aggression was hidden; on the other, fake material regarding Article 370 was published. Members of the EU parliament were given private tours of Kashmir but presented as official members."

Regarding social issues, he said the Indian disinformation network had done "false propaganda regarding minorities and women [in Pakistan] and then anti-Pakistan resolutions were passed in the EU Parliament".

This was the highest level of propaganda and "we have no doubt that it was being backed by the Indian state," he added.

"This should serve as a call to action for decision-makers to put in place the relevant framework to sanction actors and governments abusing international institutions, influencing decision-makers and misleading the world opinion."

The DG ISPR said Pakistan as a nation had dealt with the coronavirus crisis last year "wisely".

"Despite its limited resources, Pakistan gave a full response through the NCOC and the world is acknowledging it," he said.

"All doctors, paramedics, health workers and institutions working [to tackle the health crisis] are worthy of tribute."

Uganda's Museveni on track for sixth term as president

‘We may never find patient zero’: WHO urges to be ‘careful’ about attributing start of Covid-19 pandemic