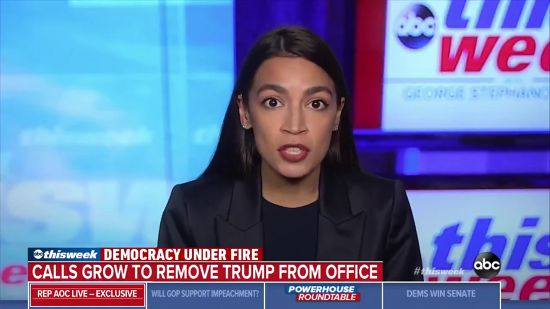 Rep. Alexandria Ocasio Cortex joined ABC's This Week to discuss the violent insurrection on the Capitol, and she pretty much nailed it. She was asked about a letter that was sent from Republicans in Congress to Joe Biden asking him to intervene in a second impeachment trial, even though their lives were at risk during the riot.

Here is what she had to say to that request:

"Well you know I think there is a couple of things. One is, we have to understand that what happened on Wednesday was insurrection against the United States. That is what Donald J. Trump engaged in, and that is what those who stormed that Capitol engaged in. And so when we talk about healing, the process of healing is separate and that requires accountability. And so if we allow insurrection against the United States with impunity, with no accountability, we are inviting it to happen again. And that is how serious it is.

If a foreign head of state, if another head of state came in and ordered an attack on the United States Congress, would we say that should not be prosecuted? Would we say there should be absolutely no response to that?

‘As if it was Baghdad’: US Secret Service creates fortified ‘Capitol Green Zone’ ahead of inauguration