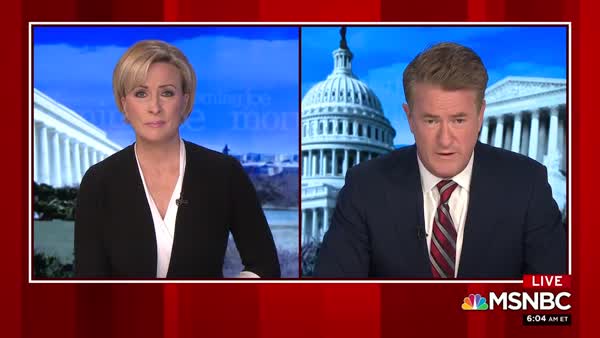 Joe Scarborough said it's time to stop trying to figure out what Trump is. "He's a fascist," he said.

"I said that well before this, this happened. He encourages violence. and this is not new. I saw -- I'm not going to even say your name. A rioter I have known for some time and respected. But one rioter said that Donald Trump turned bad. He turned even darker. You know, that would be kind of hard for Nancy Pelosi and other people whose lives have been threatened the past four or five years, to decide that Donald Trump has just turned bad.

He reminded us about Trump's campaign talk about "second amendment solutions" to stop Hillary Clinton from getting elected and from appointing Supreme Court justices.

"I wrote at the time in the Washington Post, 2016, that Donald Trump had once again crossed a bloody line. And this time there was no coming back from it. That the Republicans needed to drop him as their nominee for president before something tragic happened. They continued letting him do this. After Charlottesville, talking about enemies of the people. praising a congressman for beating up a reporter who had just asked a question about health care. Constantly glorifying violence. Who does this? Who does this? Fascists do this. And they have throughout history.

"Read Mussolini's biography. What did he do? We would go out and give speeches, and right at the top of anything you read about Mussolini, he rose to power by inspiring people to go and attack and invade and to trash government buildings in Italy."