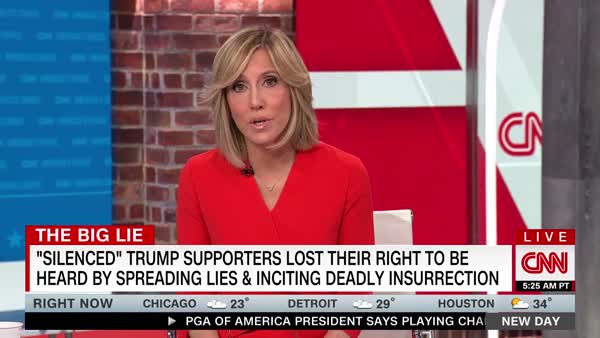 Alysin Camerota is one of the calmest journalists on cable news, always willing to hear other points of view. So this was that much more powerful to hear, because she's just had it with Trump supporters. She's still calm -- but she no longer cares what they think.

"I want to take the notion that we need to listen to Trump supporters for somehow being censored. In the hour at the U.S. Capitol, President Trump told them, 'Make your voices heard.' Let me show you some of the very special people he wants us to hear from.

"For instance, take this wise shaman. This is a prominent Qanon crackpot and long-time Trump supporter. He was taken into custody on Saturday, charged with violent entry into the U.S. Capitol. This morning, I am very hard pressed to see what this mad minotaur has to teach us.

"How about this guy? He left a nasty note in Nancy Pelosi's office and stole some of her mail. I guess he didn't know that's a federal crime. I'm not sure we should take any pointers from him. We are supposed to listen to members of this bloodthirsty mob beating people. For the record, I don't think the arsonists that caused vandalism should be heard from. The violent mob that descended on the Capitol had their chance to have a say on Wednesday. Hundreds of journalists with cameras were positioned along the protest group to capture the rioters feelings and anger. They broke windows, they scaled walls. They entered, carried a Confederate flag into the Capitol rotunda. They defecated in the halls of the U.S. Capitol and they killed a police officer.

Best car demisters 2021: how to defog your windscreen and the tools to help