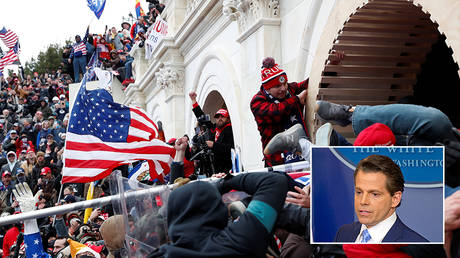 Speaking to the British media, former White House communications director and Trump critic Anthony Scaramucci has called for the president to be jailed for inciting the riot at the US Capitol on January 6.

The interview came ahead of a meeting of the House of Representatives on Monday, at which Democrats are expected to present legislation to begin impeachment proceedings against Donald Trump over the riot in Washington DC that left six people dead and numerous injured, and resulted in dozens of arrests.

Due to Trump’s perceived role in instigating the violence, Scaramucci declared that the president should be punished.

Anthony Scaramucci was one of Trump’s supporters during the presidential campaign and the early days of his administration. However, since being hired as White House communications director and then fired just 11 days later, he has become one of the most outspoken critics of the president.

The Democrats have been calling on Trump to resign or for Vice President Mike Pence and the Cabinet to invoke the 25th Amendment. However, both moves have been resisted, as GOP lawmakers call for the country to move on from the riot and the Republican attempt to overturn the election results in the spirit of unity. Democratic Members of Congress have rebuffed that, stating, “There can be no unity and healing without accountability and justice”.