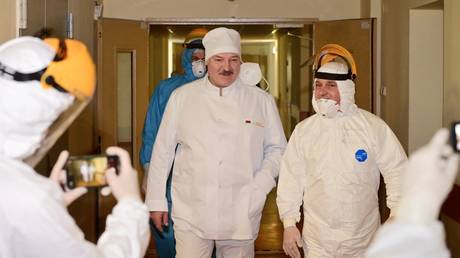 While mass protests and civil unrest would be enough to drive almost any president nuts, Belarus’ veteran leader Alexander Lukashenko has said the opposition are out of their tree if they think they can get to him that easily.

Speaking in an interview published by the Rossiya-1 news channel aired on Sunday, Lukashenko insisted that he had been too busy to worry about the opposition in his country. “A person gets used to everything,” he said.

“The president is a squirrel in a wheel, it is impossible to stop. The wheel spins, and you run, run - until you hoof, you fall," said the Belarusian president. He added, in his customary unique turn of phrase, that he is less concerned now about what, in the future, "has to end.”

At the same time, Lukashenko acknowledged that he has cut a lonely figure on the international stage, amid condemnation and sanctions from across much of Europe. He pointed to Russian leader Vladimir Putin as both a political ally and a personal friend, but added that he had few others – and plenty of opponents. “Time will tell whether they will become enemies,” he reflected.

Belarus has faced mass protests since August, when Lukashenko claimed victory in the country’s presidential poll, which opposition figures and many international observers say was rigged in his favor. Hundreds of thousands of demonstrators subsequently took to the streets to call for him to stand down and trigger a new vote.

Authorities have cracked down on dissent, clashing with demonstrators in the capital and across the country. Despite characterizing the opposition as Western-backed “puppets,” Lukashenko has committed to stepping back from the top job once a new constitution is ratified. He has insisted that a transition of power before the new document is voted through would be a “disaster.”

However, his apparent exit strategy has been meet with skepticism by some, including opposition figurehead Svetlana Tikhanovskaya, who ran against Lukashenko and has since fled to Lithuania. Dismissing the move as disingenuous, she told a meeting organized by pro-NATO lobbyists The Atlantic Council, that “I don’t think that Lukashenko will step down voluntarily,” she said. “By talking about the new constitution, Lukashenko attempts to buy himself time to justify his staying in power. All his promises are fake. The rhetoric is used to deceive the West.”