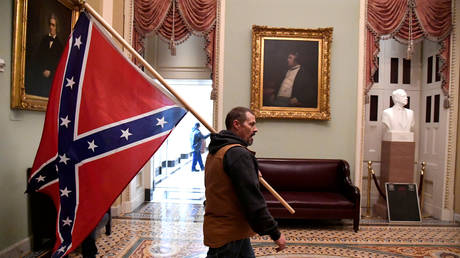 Many protesters who shot to infamy for their role in the US Capitol building riot are already in police custody, but the FBI is having trouble finding a prominent demonstrator who was seen carrying a Confederate flag.

The agency is asking the public for help finding the man who was seen carrying the flag through the halls of the building that houses the US Congress.

The sight of the Civil War-era flag in the home of American democracy sparked outrage from many, with several prominent Democrats citing it as evidence that the protesters were white supremacists.

#FBIWFO is seeking the public's assistance in identifying this individual who made unlawful entry into US Capitol on Jan. 6. If you witnessed unlawful violent actions contact the #FBI at 1-800-CALL-FBI or submit photos/videos at https://t.co/NNj84wkNJP. https://t.co/Dxyb7kweea pic.twitter.com/DSbXkNx0Il

Despite this, the bureau has yet to identify the man and tweeted images of him in a bid to shed light on his identity.

The man has become known as ‘Confederate Flag Guy’ among the internet sleuths who are also trying to track him down.

WHY can't we ID this guy? I have been searching everywhere. A lot of dead ends. Close calls but not him. There's a big group of us hell bent on nailing him. Spread the picture. pic.twitter.com/m7dVjYd4Fh

Several other noteworthy figures whose images went viral during and after the riot have been arrested. On Sunday, the FBI announced it had arrested two men who were photographed in the Senate chamber with zip-tie restraints. The men were named as Eric Munchel of Nashville and Larry Brock of Texas.

The arrest of Jake Angeli was announced on Saturday. The Arizona man wore a distinctive horned hat and carried a spear during the siege.

The arrests of Adam Johnson, who went viral for making off with Speaker Nancy Pelosi’s lectern, and Richard Barnett, who was pictured sitting at a desk in Pelosi’s office, were also announced in recent days.