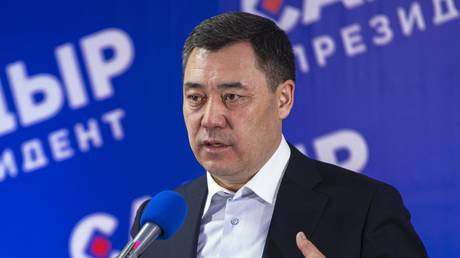 Three months ago, he was behind bars serving an 11-and-a-half-year prison term for alleged kidnapping. Now, Sadyr Japarov has been elected as President of Kyrgyzstan, securing an overwhelming victory with 79 percent of the vote.

Japarov had become the country's prime minister in October, after being sprung out of jail by protesters demanding the removal of his predecessor, Sooronbay Jeenbekov, during violent riots. The street movement was formed after Kyrgyzstan's parliamentary elections on October 4, when some of the country's opposition parties refused to accept the result. As well as breaking Japarov out of prison, demonstrators also stormed the White House, Kyrgyzstan's presidential residence.

Once out of jail, he was quickly acquitted and rapidly elected by parliament as Interim Prime Minister. Then, once Jeenbekov resigned, Japarov was promoted to Acting President, after the country's speaker of the parliament refused to accept the post.

Along with affording him his election victory, the country also voted in favor of an overhaul of government, with 81 percent opting to move away from parliamentary democracy and to revert to Kyrgyzstan's old presidential system.

Once implemented, the balance of power will shift away from the country's legislature and towards the executive branch, a more common system in the former Soviet bloc of countries.

"During the past 30 years, corruption has taken root in every sphere of our lives. But from now on, we won't allow it to continue that way," Japarov has vowed.

His landslide blew away all other candidates, with runner-up Adakhan Madumarov receiving just 6.7 percent.

Bishkek's political system has seen constant changes in the last two decades, with three leaders toppled by protest since 2005. Elsewhere in Central Asia, politics is comparatively less dramatic, with states often keeping the same leader for a decade or more.

The sentiment was shared by Russia's President Vladimir Putin, who congratulated Japarov, noting that he hopes that Moscow and Bishkek continue to build on their ties.

Big Super Bowl advertisers bow out amid struggle with tone

The Boy Whose Head Was Filled with Stars: The Inspiring Illustrated Story of How Edwin Hubble Revolutionized Our Understanding of the Universe