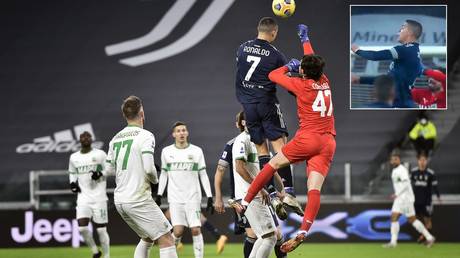 Cristiano Ronaldo has left some fans questioning as to whether he is subject to the generally accepted laws of gravity after he was seen soaring above the Sassuolo defence during Sunday's 3-1 win Serie A win for Juventus.

Ronaldo etched his name into the history books once more in the game, with his 92nd minute strike making him the first player to have scored at least 15 goals in Europe's top five leagues in each of the past 15 seasons.

Cristiano Ronaldo is the ONLY player to score at least 15 goals in each of the last 15 seasons in the top five European leagues.

And while the accolade is indeed an impressive one for the evergreen Portuguese, some fans were more impressed by Ronaldo's incredible leaping ability than by his continued goalscoring exploits.

The 35-year-old continues to defy the ravages of age in Italy's top flight thanks to an infamously robust training regime designed to maintain his superstar physique for as long as possible and judging by footage from Sunday's game, he certainly isn't neglecting box jumps in his training.

Ronaldo's goal - a low shot into the bottom of Wojciech Szczesny's net in stoppage time near the end of the match - was his 15th in just 13 Serie A appearances so far this season and means that he has scored at least that many goals in each campaign since the 2006-07 season in spells with Manchester United, Real Madrid and now Juventus.

The goal takes Ronaldo's tally in Italy to an incredible 84 in just 104 appearances in the infamously defensive-heavy division.

He has now scored an incredible 759 career goals for club and country, earning several records along the way - including being the all-time top scorer for both Real Madrid (450) and Portugal national team (102), as well as the top goalscorer in the history of the Champions League (134).

And judging by Ronaldo's stunning leap in the Sassuolo game, one might expect more than a few goalkeepers to be plucking one of his headers out of the back of their net before he calls time on his legendary career.

Hitler Ordered Bridges Across the Rhine River Blown Up. This One Remained Intact.