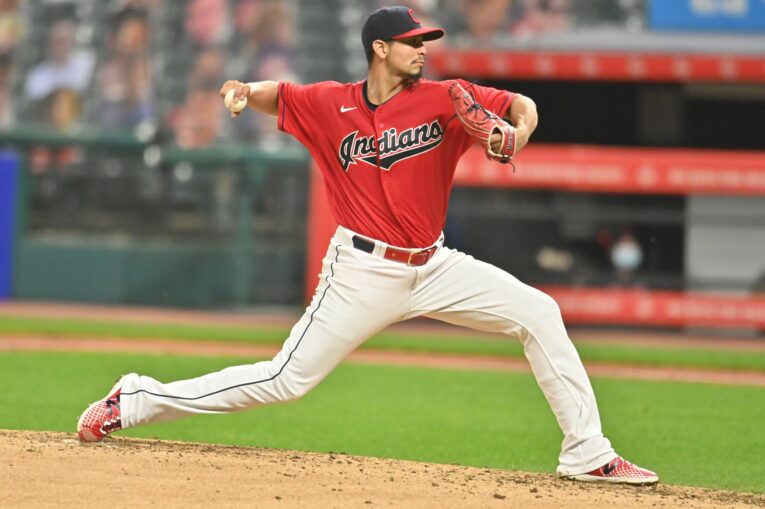 Well, we don’t have to wait for Steve Cohen to officially announce his arrival as owner of the New York Mets anymore, right? Honestly, last week’s blockbuster trade still feels like a dream, but boy, am I glad it’s not.

For whatever reason, I missed the earlier reports on Thursday mentioning the possibility of Francisco Lindor heading to the Mets. I know, I don’t know what I was doing either. It wasn’t until I got a text from a friend that said, “ALSO…LINDOR!!!!” which understandably made me think, “What the hell is he talking about?” Then, I logged onto the Twitter machine and proceeded to have a small heart attack over what I saw.

Just like everyone else, though, I fell off my chair one more time upon hearing that the Mets not only nabbed Lindor, but also Carlos Carrasco. There has been plenty of virtual ink discussing why we shouldn’t overlook Carrasco in this deal, but it’s really hard when the other guy New York acquired has done this:

The 2020 season feels like a million years ago at this point, but let’s not forget how much of a dumpster fire the rotation was beyond Jacob deGrom and David Peterson. While New York squeaked into the top half of the league in rotation fWAR (4.6), its 5.37 ERA was the league’s fifth-worst mark. Even with Marcus Stroman accepting the qualifying offer and Noah Syndergaard hopefully returning sometime before the 2021 All-Star break, we all knew the Mets needed to make serious rotation upgrades this winter.

Carrasco isn’t the youngest (he’ll be 34 in March), but he brings something last offseason’s rotation “upgrades” in Rick Porcello and Michael Wacha didn’t arrive in Queens with: elite consistency over a prolonged period of time. It was easy for Cookie to get overlooked in Cleveland most years because Corey Kluber was also there and busy winning two American League Cy Young awards. That doesn’t diminish the kind of production he put up, though.

While his last two seasons have been shortened — 2020 was obviously short for everyone, but his 2019 campaign was limited to 80 innings because of a chronic myeloid leukemia diagnosis — he accumulated at least 3.0 fWAR on four occasions between 2014 and 2018, including two years with 5.0-plus fWAR. The one season he missed that number? It was in 2016, and he still finished with 2.4 fWAR in 146.1 innings.

When looking at pitchers with at least 500 innings pitched since 2014, Carrasco consistently ranks among the best in baseball. Here are some of his stats and where he ranks:

My favorite stat of the four listed above is his SIERA because of the dude he’s tied with: deGrom. Carrasco hasn’t necessarily had the insane breakout and prolonged dominance like deGrom has the past few years, but he’s consistently been a productive frontline pitcher who can eat innings. Those are all things the Mets desperately needed to find for their 2021 rotation.

And when you throw in how much of a bargain it’ll be to get this kind of production from a financial perspective, it gets even better:

Pretty nice deal for a guy that averaged 3.1 WAR over last seven seasons and 1.6 WAR in 2020 shortened season.

His current Steamer projections look awfully familiar to the numbers he’s already consistently put up, too, and he currently has the second-highest projected fWAR among Mets starters:

As one can imagine, there would naturally be a little concern and risk with regard to paying a pitcher more than $10 million as he enters his mid-30s, but Carrasco has been reasonably durable throughout his career. He’s thrown at least 180 innings three different times and tossed 392 combined frames between 2017 and 2018. He came back strong in 2020 with 68 innings pitched over 12 starts, showing he’s fully recovered and back to his usual self after that health scare in 2019.

As a pitcher continues to age, it’s always interesting to see how they adjust along the way to remain productive. Carrasco is an interesting case because he’s been so consistent. Outside of averaging 94.3 mph in 2017, Cookie’s fastball velocity has been sitting around 93.5 mph over the past few years. As the seasons have gone on, he’s also been leaning on his fastball less frequently. His 39.3% usage rate from 2020 was a career low, while he saw a huge uptick in changeup usage (27.0%), along with continued reliance on his slider (22.6%) and curveball (10.8%).

Any way you slice it, this guy is a stud and the Mets found a way to acquire him for at least the next two years for just $24 million, along with getting one of the game’s best young shortstops, all without parting with any top prospects. Just masterful. We knew Carrasco was no slouch, but it’s easy to not realize exactly how good he is because he’s been so quietly consistent for Cleveland.

He’ll be working behind another ace as a Met, but he’ll get the love he so rightly deserves if his production continues as projection models expect in 2021.