ENGLAND’S lockdown could be toughened up in five key ways with extra mask rules and closing loopholes letting people meet up with friends from other households.

Coronavirus cases have continued to spiral out of control and ministers are considering even more drastic measures to stop Brits seeing one another. 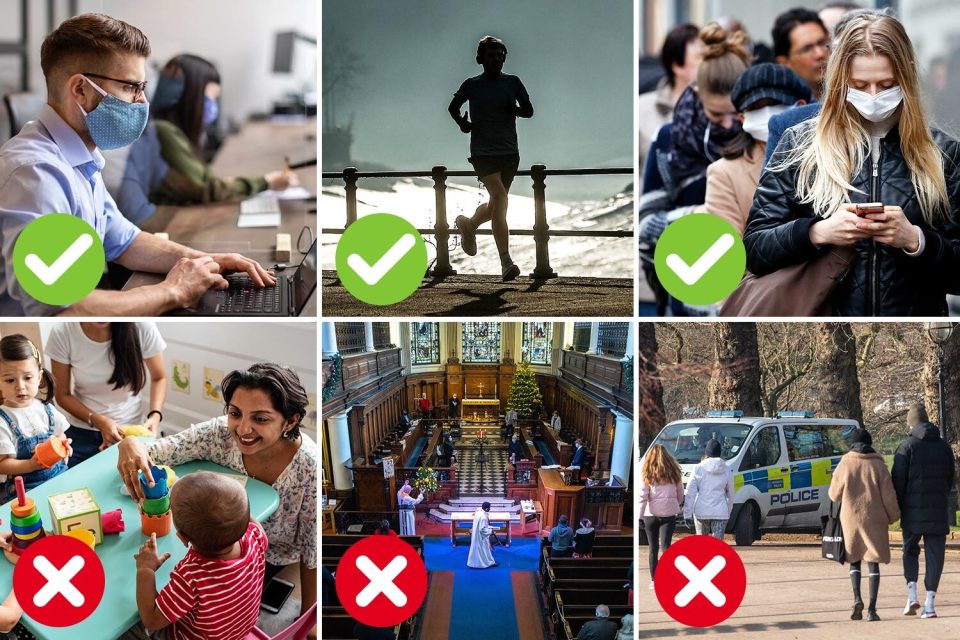 Lockdown could be toughened in five key ways[/caption]

Vaccines minister Nadhim Zahawi warned this morning that too many Brits were breaking the rules.

Mr Zahawi stressed the Government did not want to make the restrictions any tougher – but said people continuing to see their friends were helping spread the disease.

One of the rules that could be strengthened is the exemption that allows people to exercise with one other person from another household.

Parks and beaches throughout England were full to the brim over the weekend, sparking panic people were ignoring the rules.

Mr Zahawi told Brits who were continuing to see others from other households were helping the virus spread.

“Don’t go out and sit, or have that opportunity for social interaction. You are helping the virus, that’s what we want to avoid,” he said.

In the first lockdown, people were not allowed to see anyone outside their household – even for exercise.

But No10 has stressed they are not looking at scrapping support bubbles – which allow people living alone or single parents to join with one other household.

Britain’s parks were packed with people over the weekend[/caption]

Currently, face masks are compulsory in most indoor areas.

But there are fears queues for supermarkets could be spreading coronavirus even further.

Professor Whitty said this morning that crowding outside supermarkets or outdoor food stalls was an area of concern.

And Mr Zahawi said he was worried about supermarkets as potential hotspots for coronavirus.

He said: “I am worried about supermarkets, about people actually wearing masks, following the one way system and making sure when it’s at capacity, people are waiting outside.”

Ministers have cracked down on stores where social distancing rules have been relaxed, meaning there will be longer queues outside supermarkets.

Scientists have urged the Government to tighten up the rules on masks, though No10 has insisted they are focusing on enforcing the existing restrictions.

Nurseries could be closed

Almost all schools in England have been forced to close, except for vulnerable kids or those of key workers.

But under tougher lockdown rules, nurseries could also be closed – as in the first shutdown last spring.

Nursery schools could be closed – as they were last year[/caption]

Churches, mosques and synagogues could be closed

Places of worship are currently open for individual prayer and public worship.

But as coronavirus cases continued to skyrocket, they could be closed.

They were forced to close entirely during the first lockdown, and gradually reopen for individual worship.

But these could be stopped under tougher lockdown rules.

Labour leader Sir Keir Starmer said today it was surprising house viewings can still go ahead, and called for them to be closed.

He said: “One example that would surprise people is it is still possible to go and view houses, if you’re going to buy a house.

“That wasn’t allowed last March, having got to a point where things are to at least as, if not more, serious, we have less restrictions in place. We need those in place as quickly as possible.”