BODIES are being stored in a temporary morgue in Surrey after hospital mortuaries in the county reached full capacity.

Some 170 bodies are being kept in the temporary mortuary at Headley Court in Leatherhead following a surge in coronavirus deaths.

The facility first opened in April last year to ease the pressures of the first wave of the pandemic.

And more than half of those now being kept there died with coronavirus, a Surrey Local Resilience Forum spokesman said.

The county’s hospital mortuaries have the capacity to store 600 bodies but are currently full, while the temporary facility has room for 800.

A spokesperson for the Surrey Local Resilience Forum said the county would be left in “real difficulty” if the 1,400 capacity is exceeded in the coming weeks.

He said: “To put some perspective on this, during the first wave, they had 700 bodies go through that (temporary) facility.

“The first wave lasted approximately 12 weeks from mid-March to mid-May.

“Since December 21, after just two-and-a-half weeks, they have had 300 bodies go through it.”

It comes as the number of patients with Covid-19 in hospitals reached a record high in England, with NHS chief Sir Simon Stevens declaring the situation “incredibly serious”.

He said last week there were now more hospital inpatients in every region in England than back in April, the peak of the first wave.

And the number of inpatients are “accelerating very, very rapidly”, he warned, adding the pressures on the NHS are “real and growing”.

Key figures within the NHS have said there is a “potential risk” people will be unable to get an ambulance in their time of need, if pressure on the health service continues to increase.

Many hospitals have been forced to take a dangerous detour from the usual gold standard care already – abandoning one to one care and instead enlisting one nurse to four patients.

And the culmination of rising cases, dwindling staff numbers and low morale is set to be a perfect storm to completely exhaust the UK’s healthcare system. 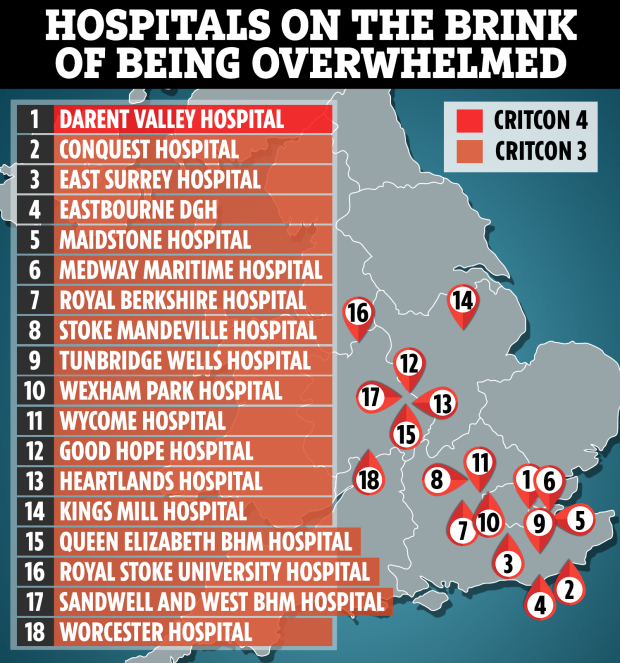 More than 80,000 people have now died from coronavirus in Britain, with cases rising by more than 50,000 every day last week.

Deaths also continued to rise at a rapid rate, exceeding the figures seen at the peak of the first wave.

Tighter Covid restrictions are reportedly being considered as a result of the surge, with ministers fearing the public is not adhering to lockdown rules as strictly as they should be.

A ban on exercising with one person outside of your household and wearing face coverings in offices are among the rules which could be reviewed.

Meanwhile, there are reports even support bubbles could be stopped amid surging cases – while people could be told they can only leave their homes once a week.

It comes as hundreds more GP-led, hospital vaccination hubs and the first pharmacy-led pilot sites will open from today — taking the total to around 1,200 in England.

Vaccine appointment letters will be sent out to everyone aged 80 or over who live up to a 45-minute drive from one of the new centres.

It means that by the end of the week, more than half the 3.2million population of over-80s will have received their first jab. 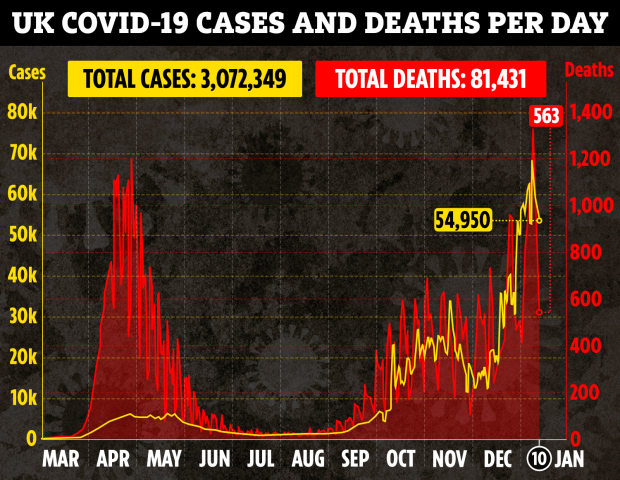