HEALTH bosses have blasted Covid sceptics who sneak into hospitals to film ’empty’ corridors and claim the pandemic is exaggerated.

Hospitals have had to separate Covid patients and cancel non-urgent care to free up space, meaning some areas may appear empty despite frontline staff dealing with a surge in patients.

Top health officials accused conspiracy theorists taking the footage of risking people’s lives by insisting the pandemic is a hoax.

One Facebook group sharing pictures and videos of ’empty’ hospitals has more than 13,000 members.

Its administrators are apparently linked to another Facebook group peddling the ‘Great Reset’ conspiracy about the pandemic, the BBC reports.

In one shocking incident last month, a doctor said he was “disgusted but mostly heartbroken” after a group of ghouls stood outside St Thomas’ Hospital in London shouting the pandemic is a “hoax”.

It comes as Chief Medical Officer Chris Whitty warned the NHS faces the “most dangerous situation” in its history with a mutant Covid strain ripping through the country.

There have been at least 3,072,349 people confirmed cases in the UK, with hospitals treating 50 per cent more Covid patients than during April’s peak.

Conspiracy theorists and lockdown activists have posted footage claiming hospitals are empty, with one video taken at Croydon University Hospital[/caption] Health officials have blasted people for risking lives by sharing misleading footage such as this video taken at the Princess Royal Hospital in Bromely[/caption]

He said: “If you sneak into a hospital in an empty corridor at 9pm at night and film that particular corridor, and then stick it up on social media and say this proves the hospitals are empty and the whole thing is a hoax, you are responsible for potentially changing behaviour that will kill people.

“It is also an insult to the nurse coming home from 12 hours in critical care having worked her guts out under the most demanding and trying of circumstances.”

Some videos have been viewed hundreds of thousands of times on social media.

One claims to show an empty Croydon University Hospital in South London and insists the government is exaggerating the Covid crisis.

Sir Simon Stevens, Chief Executive of the National Health Service in England, said people sharing fake footage could be ‘responsible for potentially changing behaviour that will kill people.’[/caption] Covid deaths and cases have continued to rise[/caption]

But a spokesman for Croydon Health Services NHS Trust told the BBC: “Contrary to videos circulating online claiming to show our hospital is empty, our services remain extremely busy.”

The spokesman added: “Regarding the A&E waiting area, the video shows only the entrance to the department.

“Patients brought in by ambulance, or those in a serious condition or requiring admission to hospital, are unlikely to be waiting in this area.

“It also risks the spread of misinformation, which could lead people to risk their own health and the health of their loved ones.”

The footage starts next to a coffee shop in the main reception area, with the man filming saying: “I’ve never seen this place so empty.”

The Croydon Health Services spokesman added: “We have a one-way system in the main entrance to help with social distancing when entering or leaving the hospital.

“The video shows this person arriving via the exit.

“The video was also filmed overnight, when the coffee shops would be closed and when we would expect to see our corridors less busy.

“We provide this care in our wards and in other clinical areas – not corridors or waiting rooms.” 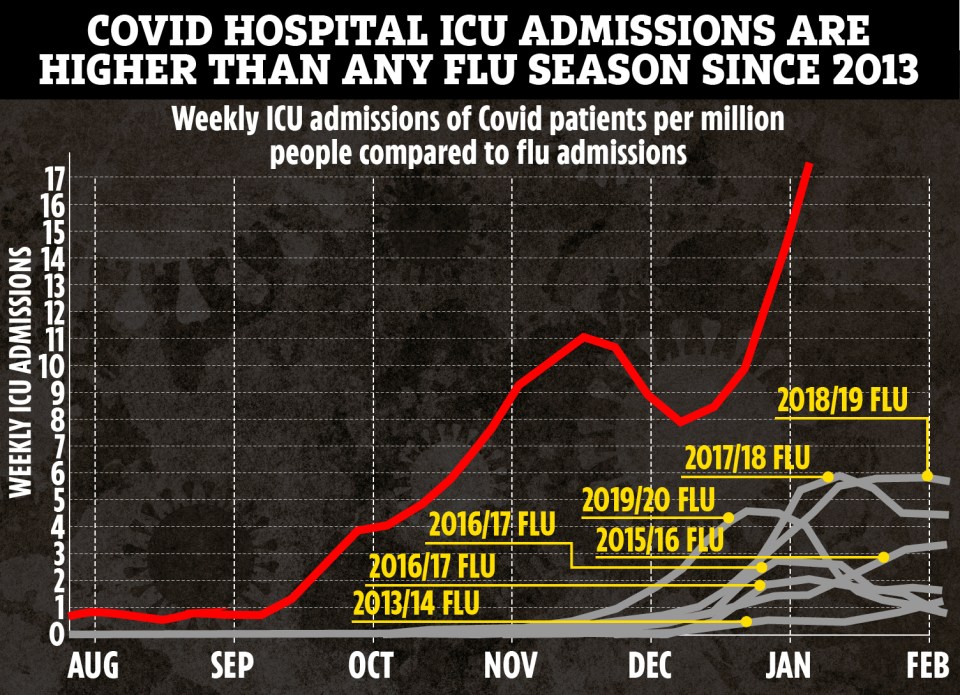 Other videos posted on Twitter show a person walking down corridors at the Princess Royal University Hospital in Bromley, South East London and claiming they are ’empty’.

Four clips, allegedly taken on New Year’s Day, show someone passing a sign for the critical care unit and a Twitter thread referring to “spare beds” and the “closed bereavement unit”.

The hospital’s bereavement suite shuts at 4pm and on bank holidays.

A hashtag encourages people to “film your hospitals”.

A spokesman for King’s College NHS Trust told the BBC its wards dealing with Covid patients were extremely busy and the footage “misrepresents what is really happening”.

The spokesman added: “This corridor is not representative of what is happening in wards across the hospital, which have seen a more than ten-fold increase in Covid admissions in the space of a month.”

Last month, a 46-year-old woman was arrested on suspicion of a public order offence following reports of video being filmed at Gloucestershire Royal Hospital.

A Gloucestershire Police spokesman said: “The woman has been bailed to return to police on 21 January, with conditions that she cannot enter any NHS premises or the grounds of any such premises, unless in the case of an emergency or to attend a pre-arranged NHS appointment.”

And West Mercia police launched an investigation into “potential Covid-19 regulation breaches” over the New Year weekend after reports of people entering hospitals to film.

Tesla is the proxy for a stock market gone mad