The NFL’s Super Wild Card Weekend is in the books, and what a slate of games it was.

Here are the biggest winners and losers from the league’s Super Wild Card Weekend:

Winners
Josh Allen and the Buffalo Bills
Allen led Bills Mafia to their first playoff win since 1995, claiming a 27-24 victory over the No. 7 Colts on Saturday. The third-year signal-caller scored three touchdowns (two passing) for the No. 2 Bills. He was 26-for-35 passing for 324 yards and added 11 carries for a team-high 54 rushing yards.

Tom Brady
The Tampa Bay Buccaneers quarterback won his first playoff game wearing something other than a New England Patriots uniform Saturday against the Washington Football Team. The 43-year-old threw for 381 yards on 22 completions with two passing touchdowns against the NFC East champions. Brady and the No. 5 Buccaneers advance to play the Saints in the NFC Divisional Round.

Taylor Heinicke
The No. 4 Washington Football Team probably didn’t expect too much from Heinicke against the Buccaneers, but he went toe-to-toe with Brady in a game that came down to the wire. Heinicke finished 26-for-44 with 306 passing yards and one touchdown. He also added six carries for a team-best 46 rushing yards including an impressive eight-yard touchdown run in the third. Heinicke made himself some money Saturday and became a Twitter darling while doing so.

Lamar Jackson
It wasn’t an ideal start for the Baltimore quarterback, who threw a bad interception to Titans cornerback Malcolm Butler in the first half, but he rebounded in a big way to lead the No. 5 Ravens to a win. Jackson shredded the defense with his feet — 16 carries for 136 yards with one TD — and did enough with his arm — 17-for-24 for 179 yards with on INT — to earn his first playoff victory.

Cleveland Browns defense
The No. 6 Browns forced three Steelers turnovers in the first quarter — two interceptions, one fumble recovery for a touchdown — and it helped the Browns take a 28-0 lead after the first quarter. Pittsburgh did try to make it interesting down the stretch, but another crunch-time interception (the fourth INT the night, fifth forced turnover) sealed the win for Cleveland.

Ravens-Titans rivalry
The No. 5 Ravens defeated the No. 4 Titans at Nissan Stadium on Sunday, and NFL fans were treated to some in-game pettiness. Baltimore, you may have heard, stomped on Tennessee’s midfield logo after a crunch-time interception by Marcus Peters. The display was in response to Tennessee who had done something similar earlier this season, and it seems this could be a developing AFC rivalry. 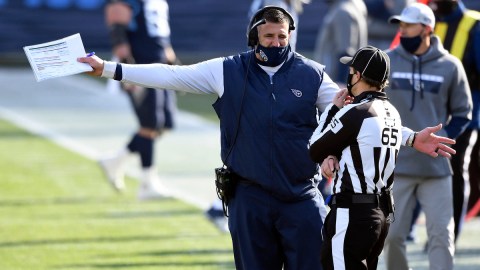 Losers
Russell Wilson and the Seahawks offense
Wilson and the Seattle offense were abysmal Saturday against the Los Angeles Rams. Wilson, who faced constant pressure, was 11-for-27 for 172 yards with two touchdowns. The veteran signal-caller did throw a pick-six and was sacked five times as the offense went 2-for-14 on third down, though.

Chase Young
The No. 2 overall pick in the 2020 NFL Draft threw some shade at Tom Brady leading up to Washington’s NFC Wild Card Game against the Buccaneers. Tampa Bay responded by not letting Young get his hands on the signal-caller as the Buccaneers stymied the Washington pass rush in a 31-23 defeat. Both Bucs head coach Bruce Arians and Jason Pierre-Paul let Young know, too.

Derrick Henry
The Titans running back entered Sunday’s contest against the Ravens as arguably the biggest storyline in a game that featured Lamar Jackson. The NFL’s leading rusher, who eclipsed 2,000 yards on the season, was held to just 40 yards on 18 carries and caught three passes for 11 yards. It was the fewest yards of offense this season for a player who rushed for 250 yards just last week.

Colts coach Frank Reich
The Colts coach made multiple questionable decisions against the Bills on Saturday, but one specifically led to Indianapolis’ postseason exit. Reich decided to keep to offense on the field on fourth-and-goal from the Buffalo 4 yard line, rather than bringing out the field goal unity in what would have helped the Colts take a 13-7 lead. The fourth-down attempt was unsuccessful and the Colts ended up losing by three points.

Ben Roethlisberger
The Steelers veteran quarterback threw 60-plus passes for 500-plus yards and four touchdowns. He also threw four (!!) interceptions against the Browns, including a game-sealing pick with three minutes remaining in the defeat. Don’t let the empty stats confuse you.

Matt Nagy and the Bears offense
The Bears’ offense was held to three points for 99% of the game before a touchdown pass from Mitchell Trubisky to Jimmy Graham with time expiring. Chicago lost 21-9 to the Saints with Nagy, the Chicago head coach, seeming hesitant from the get-go. The Bears were 1-for-10 on third down, 0-for-1 on fourth and had just 11 first downs in the game. The Bears were held to 239 yards of offense with 48 yards rushing.

NFL officials
It was a rough weekend for the zebras in many regards, but nothing was worse than a crucial fourth-quarter call during the Bills-Colts game. Officials wrongly gave the Colts a second chance to win when they failed to correctly award a fumble by Colts wideout Zach Pascal to the Bills. The play, which came with 26 seconds left, would have sealed the outcome at the time, halting any further drama.

Hitler Tried (and Failed) To Destroy London in 1940