THE Crown viewers were left “gasping” by “merciless” Prince Andrew scene bragging about his “young, racy American girlfriend” with the Queen.

While speaking about the film, Tom’s Prince Andrew says she stars as a 17-year-old who is seduced by “perverted, older predators”.

Many viewers have drawn comparisons between this discussion and the real life scandal surrounding Prince Andrew, who was accused by US-born Virginia Roberts Giuffre of having sex with her when she was 17. Prince Andrew has denied all accusations.

In the scene, The Crown’s Andrew explains: “It’s set in the 1920s and follows an impressionable, nubile 17-year-old girl.”

He retorts: “Don’t be such a prude, Mummy. The story is that she returns home from a finishing school in Switzerland to her mother’s house in the English countryside.

“There she meets several twisted and perverted older predators, who seduce the vulnerable, helpless young Emily as we follow her induction into sensual pleasures.”

The Queen, looking distraught, asked: “Are you sure it was even legal?” 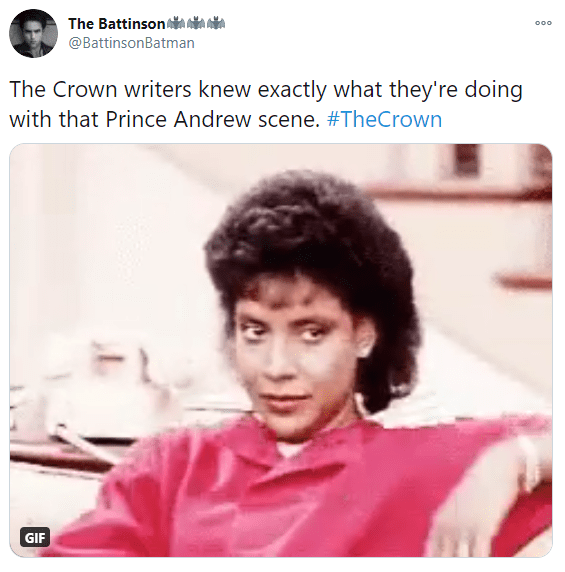 Viewers suggested the scenes were a nod to the controversy following Prince Andrew’s friendship with billionaire paedophile Jeffrey Epstein.

One person said: “Started S4 of #TheCrown yesterday and for everyone wondering how the team were gonna address the whole Prince Andrew thing… I think this scene does pretty well.”

Another suggested: “I was full blown expecting the Queen to look straight into the camera during the Prince Andrew scene in episode 4 of the new season of #TheCrown”

Prince Andrew as he looks now[/caption]

A third remarked: “The various on-the-nose Andrew references in the new season of #TheCrown”

Last year, Prince Andrew stepped back from official engagements following his disastrous BBC interview about the scandal and his friendship with Jeffrey Epstein.